by Mihai Andrei
in Other, Research
Reading Time: 2 mins read
A A
Share on FacebookShare on TwitterSubmit to Reddit 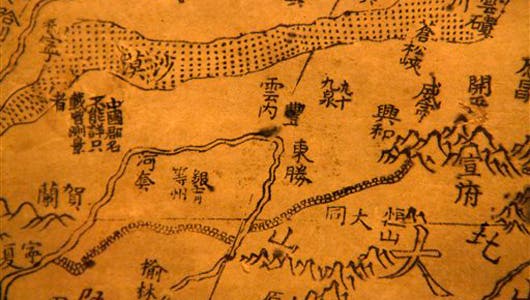 It was drawn by an Italian Jesuit missionary called Matteo Ricci, who was the first to visit today’s Beijing in the late 1500s (he’s also the guy with the silkworm in the cane legend). Among numerous things he did (bring western science to China, hygiene notions to the west, start some catholic missions, etc), he also studied geography. While I don’t believe this was hist top specialty, he does note some quite amazing things, though personally I don’t find it anywhere near as spectacular as the Piri Reis map.

He described Africa as having the highest mountain and the longest river, notes that there are numerous bisons and wild horses living in North America and even gives a short description of the discovery of the americas.

“In olden days, nobody had ever known that there were such places as North and South America or Magellanica. But a hundred years ago, Europeans came sailing in their ships to parts of the sea coast, and so discovered them.”

There are only two copies of this map, which makes it extremely hard to find (which is why it earned the nickname of ‘impossible black tulip or cartography’. A copy was purchased for no less than 1 million dollars, making it the second most expensive map ever.