If harnessed at a much greater potential than it is now, sunlight might not only become the primary source of energy on the planet, but the cheapest too. In one hour the sun sprays our planet with enough energy to power all the electrical needs of the word for an entire YEAR. Now that’s something to think about, and luckily scientists around the world have studied this prospect to find a solution, other than the current counter-efficient photo-voltaic cells that power solar panels. This past week alone, two independent studies published almost concomitently come up as breakthroughs for the ultimate development of cost-effective and productive sun harnessing technology.

You might remember  Daniel Nocera, an MIT professor of Chemistry, and his artificial leaf setup featured on ZME Science a few months back. Now, Nocera has officially presented his work to rest of the scientific community, after his paper was published in the journal Science. Basically, the chemist’s device splits water into molecular hydrogen (H2) and oxygen (O2), somewhat similar to the way plants carry out the first step in photosynthesis. These components can then be stored and used as fuels.

Other research in the past rendered similar results to that of professor Nocera, however the conditions and equipement required to produced the same effects were way more cost detriment. However, Nocera’s group managed to get artificial photosynthesis to work using benign conditions and cheap, abundant materials as catalysts. Specifically, the setup was comprised of a simple, commercially available triple-junction solar cell, connected with two catalysts: cobalt-borate for splitting the water molecule and a nickel-molybdenum-zinc alloy to form the hydrogen gas. 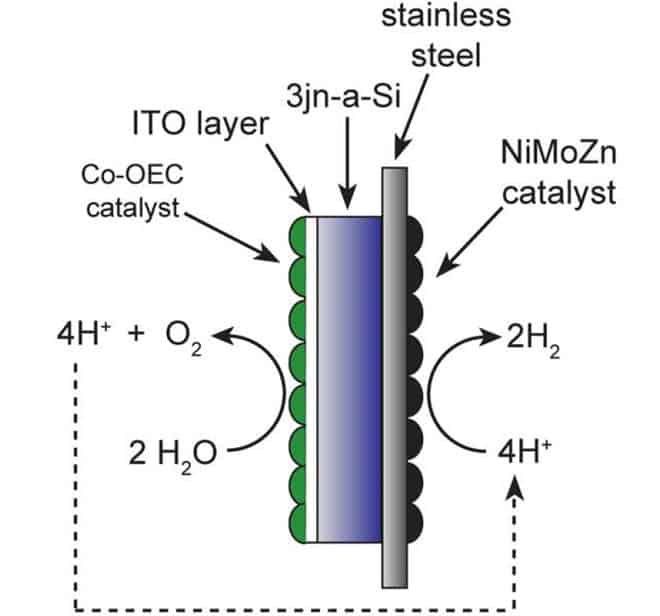 The researchers say they haven’t fixed a release date or even size for the final product, which scientists claim will be capable of powering a small home without a problem. The artificial leaf system will also have wireless capabilities, which is actually the most enticing part of this particular research.

“Because there are no wires, we are not limited by the size that the light-absorbing material has to be,” says Steven Reece, a research scientist with Sun Catalytix (a company cofounded by Nocera) who worked on the discovery. “We can operate on the micro- or even nanoscale…so you can imagine micro- or nanoparticles, similar to the cells we’ve worked with here, dispersed in a solution.”

“As the inputs are light and water, and the output is fuel, one can certainly see the applicability of something like that to the developing world,” says Thomas Jarvi, chief technology officer at Sun Catalytix.

The second study, published concomitently with the hydrogen fuel artificial leaf producer, involves a different take on harnessing photosynthesis, namely recycling CO2. In the natural world, the sun’s energy extracts electrons from a water molecule, which then reduce CO2 into fuel (in plants, the fuel takes the form of carbohydrates).

In the report, published by a team led by chemists Richard Masel of Dioxide Materials in Champaign, Illinois, and Paul Kenis of the University of Illinois Urbana-Champaign, the researchers show how they’ve managed to come up with a more energy efficent solution to turning CO2 into CO.  Converting CO2 to CO has always required applying large electrical voltages to CO2 to make the change. These large eletrical voltages actually translate into high loss of energy, which would’ve never compensate in carbohydrate fuel.

However, the researchers have managed to make the process extremely cost-effective, now, by using ionic liquid in their setup, a novel component to use as a solvent in junction with CO2 – one that is 10 times more energy efficient.

Remarkably, study leader Masel claims the photosinthetic setup might provide the necessary background for an upgrade capable of  turning CO2 into “syngas”—a mixture used in the petrochemical industry to make gasoline and other fuels.

The experiment “shows that one can make syngas efficiently from any source of electricity,” Masel says. However, large-scale versions of the device probably won’t be demonstrated until 2018. “Presently we have demonstrated the process on the 1-centimeter-squared scale. We need to go to the million cm2 to make significant amounts of gasoline.