It all started when the official Twitter of the Badlands National Park in South Dakota started tweeting climate change facts.

by Mihai Andrei
in Climate, News, Offbeat
Reading Time: 3 mins read
A A
Share on FacebookShare on TwitterSubmit to Reddit

It all started when the official Twitter of the Badlands National Park in South Dakota started tweeting climate change facts. Then, they were deleted — and everything just went crazy. Like heads on a hydra, more and more National Park Twitter accounts emerged and/or started sharing climate stuff. Because you know, it’s the 21st century and freedom of information is a thing. 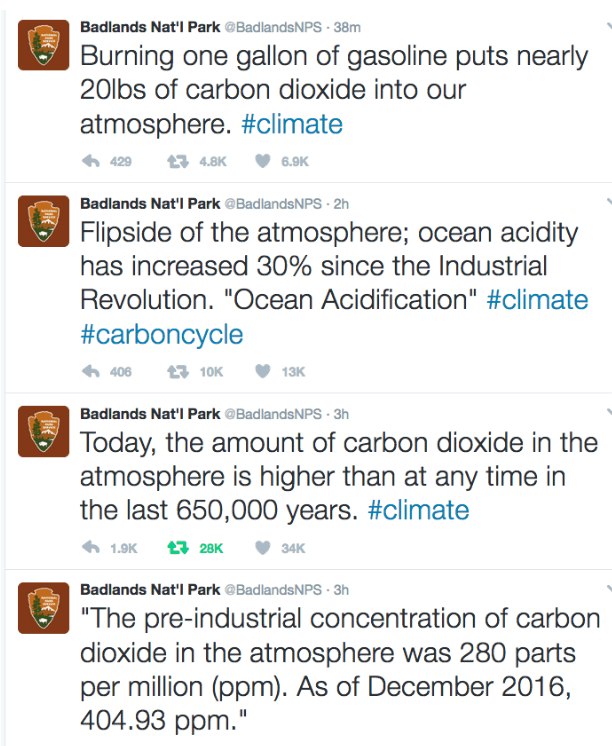 The Badlands is a national park in southwestern South Dakota. It has some beautiful landscapes, some rare wildlife, but all in all, it’s a national park much like all others — except this week, the Badlands started an international discussion. Someone working there (or perhaps a former employee) started sharing factual information about climate change. If we wanted to nitpick we’d say that the data is not exactly accurate but that’s not really the issue here. The issue is that a national park tweeting climate facts is a problem — which let’s face it, just sounds strange.

Normally, it shouldn’t do more than raise some eyebrows. It’s not exactly the thing you’d expect to see on such an account, but in a normal context you’d maybe say they’re doing a climate awareness week or something. But this isn’t a normal context. The newly elected US administration is battling a full-fledged war against climate and has also issued a ban on media communications for several public agencies, including the Environmental Protection Agency. The tweets were deleted which, as anyone who’s been on the internet for more than two months expected, backfired. Everyone started talking about the tweets. They were featured on the BBC worldwide website and in the Washington Post and on CNN and on NPR and pretty much everywhere. So for starters:

Thank you to whoever deleted the Tweets!

You’ve probably managed to make more publicity for climate change than we do in a year — and that’s not all you did. A few more alternative National Park accounts have popped up, powered by current or former National Park staff acting as a self-described “resistance”. Most notably, the AltUSNatParkService (@AltNatParkSer) already has over 1 million fans, tweeting things such as:

Hello, we are the Alternative National Park Service Twitter Account activated in time of war and censorship to ensure fact-based education. https://t.co/Ez8twyES7p

Snarky remarks aside (such as the one below), I think they’re doing a great job and they absolutely have the moral highground. Politics shouldn’t dictate science, and one administration shouldn’t be allowed to push the country (and to an extent, the world) back decades in terms of sustainability. Furthermore, banning scientists from communicating with the public should never happen, and the fact that it has, and at such a large scale, with no valid reason, is truly terrifying. But I guess at least we all learned something about how the internet works, didn’t we?

Recent research suggests that polar bears don't actually like the cold, so they're fine with climate change. pic.twitter.com/WLxDOnTZTQ