Rapper B.o.B. wants people to give him $1 million so he can prove the Earth is flat

The comments are glorious.

If you’ve been following some of our previous stories, you know that there’s a growing number of people who think that the Earth is flat. Not as a joke or as a protest, they seriously refute a mountain of evidence (as well as common sense) and believe the Earth is flat. There are some prominent personalities among them, including the likes of Shaquille O’Neal and rapper B.o.B. Now, the latter started a GoFundMe campaign to send a satellite to space and see whether the Earth is flat.

Now, I know what you’re thinking — “That’s stupid! We’ve already sent satellites.” Or at least that’s what you should be thinking. Well, like most flat-earthers, B.o.B. thinks there’s a massive, global conspiracy, which faked all the photos to make it look like the Earth is round because… reasons. So he wants to see for himself.

“I would like to send one, if not multiple, satellites as far into orbit as I can to find the curve,” B.o.B explains in an accompanying video: “I’m looking for the curve.”

As I’m writing this, the campaign raised $2908 out of its goal of $1M, but even so, B.o.B. can accomplish his goal (though he probably doesn’t realize it). In 2009, a group of MIT students sent a camera into the stratosphere for as little as $150. For a more complex project with a high-res camera, such as that started by a pair of Florida students in 2015, he’d have to pay $1,000 — so he’s way ahead of plan. Or you know, we could trust one of the 1,450 operational satellites in orbit. Who knows, maybe we’ll get lucky and find one that isn’t in on this global conspiracy theory. Here’s a video from a similar project, ran by University of Leicester students who weren’t trying to prove that the Earth is flat. 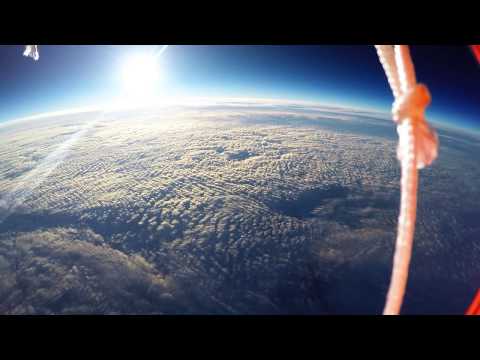 But make no mistakes here, these people want to prove the Earth is flat. In 2017. Let’s not expect top notch creative engineering.

The comments, as you can imagine, are glorious. For instance, one donator said that all technology is flawed so you can only really see the ear as it is with your naked eye — anything with a round lens would make the Earth seem round, so we can only rely on our eyes. Our eyes… which don’t have a round lens. Yikes!

Bro. I am totally with you on this. But we cannot trust anything but our senses. The technology you’re using will make it appear that the earth is round because of the curvature of the lenses mounted on your satellite. The only way to find out if the earth is flat is by going to outer soace yourself and ejecting yourself from the spacecraft, because the window glass would also have a slight curvature making the earth look round. Then you have to get out of your space suit, becayse the glass on your space suit will curve the appearance of the earth. So onky then you will see that the earth is in fact, flat.

Another went on a ramble, talking about finding gravity, which is weak but somehow manages to keep cars on the ground in Australia.

“Gravity is 10-40 weaker than electromagnetism” yet it holds cars and equipment and aircraft weighing hundreds of tonnes in the land down under Australia and manages to keep billions of tonnes of water attached to a globe spinning at 1024 miles per hour at the equator.

Others were just in it for the laughs.

“This is the dumbest shit I’ve ever seen and I’m giving this dumbass $5.00 simply because it’s the funniest thing I’ve ever seen.”

But whatever the reason may be, people are giving the rapper (who is a grown man by the way) a lot of money to send “one if not multiple” satellites into outer space and prove that the Earth is flat.