by Mihai Andrei
in Offbeat, Science 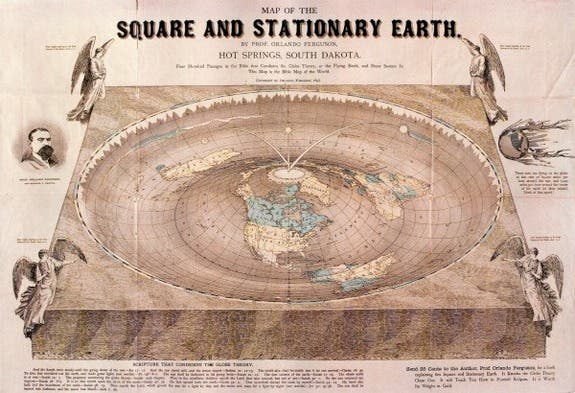 It was 1893 when Orlando Ferguson, a real estate developer based in South Dakota combined religious beliefs with some scientific theories and a big chunk of creativity to create this square map of the stationary earth. The map was accompanied by a 92 page lecture delivered by Ferguson, who referred to himself as a professor, and was delivered town after town in the US, with the point of promoting his theory, especially the fact that the Earth was flat. Looking at today’s people, I’d say his efforts weren’t quite unsuccessful.

Ferguson’s map portrays the Earth as a giant, rectangular slab with a big dimple in its center. The map, which is very fragile, was donated to the Library of Congress.

“It’s very fragile. It’s printed on tissue paper and hand-colored with watercolors,” Homuth said. He got the map from his eighth grade history teacher in Fargo, N.D., who got it from his grandfather, who lived in Hot Springs, S.D. — Ferguson’s hometown.

“Now, I’m 67. I don’t want it to fall into the hands of relatives, for God’s sake! And I don’t particularly want to sell it. So we thought we’d send it to the Library of Congress,” Homuth said.

Ferguson was trying to fit in religious beliefs with scientific theories, which is quite impossible, most of the time at least.

“Ferguson was trying to make an updated version of the flat Earth theory to fit the biblical description of the Earth with known facts,” Bingham said. Typical of flat Earths, Ferguson’s Earth is a rectangular slab, the four corners of which are each guarded by an angel. “What makes his flat Earth different from other theories is his theory holds that the Earth is imprinted with an ‘inverse toroid.'”

An inverse toroid is a mathematical figure similar to what would happen if you were to push a ball into some wet cement and then pull it up again.

“It’s pretty clever because it explains the Columbus phenomenon, where you see ships coming in over the horizon and gradually the mast gets taller and taller until you can see the ship,” Bingham said. “By 1893, most people knew about horizons so he had to come up with some way to explain that.”

What people have to learn from this is that people believed this only some 100 years ago ! People tend to forget these things and take the round globe as granted, but here’s a man portraying a flat earth in the same time Henry Ford began making his cars.

Hey, do you want to see something even better ? Some people still believe the Earth is flat today; founded in the 1950s, the flat world society has 265 members today, all of which are devoted to convincing the world that our planet is flat.