It’s mind-boggling that some people are still debating whether the Earth is flat or not. Ideally, such pseudo-science nonsense shouldn’t even be discussed — we’re just dignifying an absurd idea, giving the impression that there’s maybe a glimmer of truth to this Middle Age thinking. However, one video blogger made such an elegant demonstration of the curvature of the Earth that it merits showcasing here just for the sake of science itself.

Soundly was driving on Interstate 10 when he passed by the Lake Pontchartrain transmission lines in Southeast Louisiana and decided to make a live stream with the lovely sight. Using a telephoto lens, Soundly showed how the causeway and transmission lines go over the horizon just like ships. 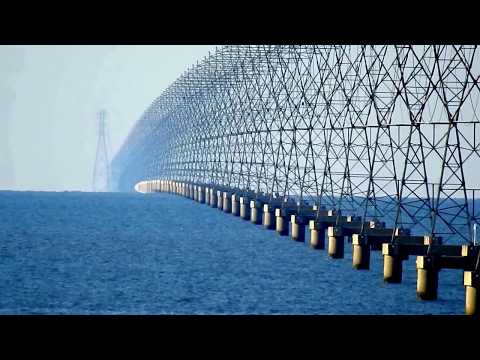 This is actually one of the rare places around the world where the Earth’s curvature is perceptible with good optics, although you can plainly notice it with the naked eye as well.

Mick West explained over at Metabunk what’s going on with the curvature effect of the Pontchartrain transmission lines.

“The line of power lines is straight, and they are all the same size and the same height above the water. They are also very tall and form a straight line nearly 16 miles long. Far better than any experiment one could set up on a canal or a lake. You just need to get into a position where you can see along the line of towers, and then use a powerful zoom lense to look along the line to make any curve apparent.”

Soundly was careful to record pictures and videos from multiple perspectives, and they all show the same thing: the transmission lines are curving. Just as anyone with a sensible knowledge of nature and science already expects.

Of course, not everyone was convinced as hilarity ensued in the comment section of Soundly’s videos, who by the way has dozens of videos debunking flat-earth nonsense.

These are only a couple of some of the most astonishing comments I’ve read and, believe it or not, the same sentiment is abundant across all social media channels. In a sense, these are textbook examples of entrenched dogmatic thinking: stubborn in the face of any facts or evidence you present. Their opinion is not based on science but some elaborate fantasy that borderlines madness. Nothing can sway them over. And while flat-earthers are, in a sense, harmless, the same can’t be said about another very similar sort of denialist — the climate change denier or the ideologically-brainwashed goof who constructs his life values and goals based on what a party says ought to be ‘true’.

This article originally appeared in 2017. It’s one of our most popular articles ever posted.