A flat-earther brought a spirit level on a plane to prove the Earth is flat. Yeah…

by Mihai Andrei
in Offbeat, Science
A A

A Youtuber and conspiracy theorist from the US has taken pseudoscience to the next level — literally. He took a spirit level onto a plane, hoping to convince people that the Earth is flat.

That people still claim the Earth is flat is simply stunning to me. It’s not just watching ships sail off in the horizon or looking at constellations, we have gone into outer space and looked at the Earth. Heck, we have a massive research outpost, the International Space Station, constantly revolving around the planet and snapping photos. In this day and age, this level of ignorance is simply not allowed, even if you’re one of the greatest basketball players of all time. But back to our guy.

D Marble decided to take his spirit level to a plane. In case you’re not familiar with a spirit level, it’s an instrument designed to indicate whether a surface is horizontal or whether it dips. It has a slightly curved vial incompletely filled with a liquid so that an air bubble remains. When the surface is completely flat, the bubble rests exactly in the middle.

He thought this would show the Earth has no curvature and that it is essentially flat:

“I recorded a 23 minute and 45 seconds time-lapse, which by those measurements means the plane travelled a little over 203 miles. According to curvature math given to explain the globe model, this should have resulted in the compensation of 5 miles of curvature. As you’ll see there was no measurable compensation for curvature.”

“Understand that gravity is a still just a theory,” he goes on to say. “No more defending what we know to be true! Now we take the fight to the enemy! #FEOffensive.”

We’ll give him a lot of creativity points, but he scores a big fat zero on the science scale. Try to figure it out for a moment. You can come up with a number of valid arguments, ranging from middle school physics to simple, common sense.

For starters, the spirit level requires a lot of stillness for the bubble to align, which plane travel can’t really ensure. Twitter was quick to point this one out.

@Tom_On_Line remarkable how the plane stayed completely 100% level during takeoff and landing, I’m beginning to question whether air travel exists.

If you want a more elegant approach, you could say that even if (theoretically) the plane would have been perfectly still and moved in a perfect way, the experiment still couldn’t have worked because that’s not how gravity works — his entire premise of curvature compensation is flawed. Twitter was all over this one as well.

Lastly, for crying out loud, the man was traveling on a plane, you’d expect he’d at least look out the window.

His initiative was well-received by other flat-Earthers — which doesn’t even come as a surprise by this point.

Take a moment and think that in the 21st century, when we are sending shuttles to the Moon and to Mars, when we are toying with the genetic make-up of the human body, when we are zooming closer towards understanding the fabric of the Universe, people are saying the Earth is flat on Youtube. What a world we live in.

Here’s the whole video, already with over 200,000 views, having been shared by several flat Earth societies, including Flat Earth Activism, God’s Flat Earth and various other globe-deniers. Yes, there are societies like these all around the globe (heh). 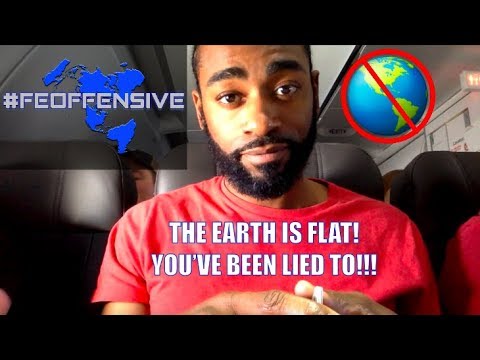