Here’s one thing that I never thought I’d be writing in 2018: the Flat Earth Society believes in climate change. “Certainly,” the group tweeted when quizzed about their thoughts on the matter. “It would be nothing short of irresponsible to question something with so much overwhelming evidence behind it.” Honestly, I’m not sure what to make of this. Let’s dig into it. 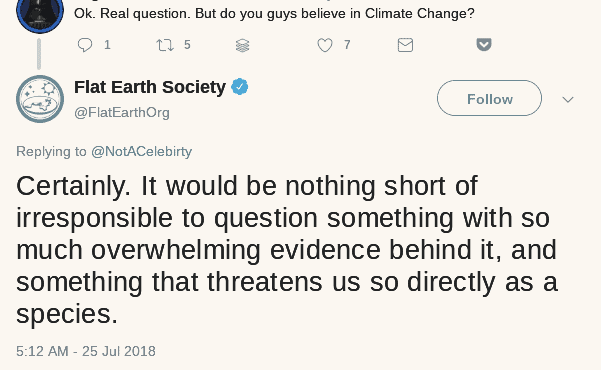 In case you have no idea what I’m talking about — first of all, I envy you. But on a more serious note, in recent years, the idea that the Earth is flat has gotten more and more popular. Yes, the belief is that our planet is actually flat and there’s one giant conspiracy to keep it a secret. Magellan is in on it, NASA’s in on it, and every piece of evidence that shows our planet from above is forged. They even have a society — you’ve guessed it, the Flat Earth Society.

The society is quite active on social media, and they also had a curious reply recently, telling Elon Musk that “Unlike the Earth, Mars has been observed to be round.” It’s a bit of a rollercoaster, but it seems that the Flat Earth Society believes Mars (and presumably, all the other planets) to be round — but the Earth is flat.

Well, to make things even more interesting, apparently they also agree that climate change is happening and that it’s a critical issue.

Why is this surprising? Well, if you have a chronic disbelief in scientists, you’d expect them to also doubt other scientific findings, like climate change. Also, people who tend to believe the Earth is flat are much more prone to other conspiracy theories, like climate change denial.

But this isn’t really as surprising as you might think. Conspiracy theorists will often contradict each other as well as themselves — being quite likely to get trapped in a state of cognitive dissonance. Furthermore, investing into a particular way of thinking requires significant investment in both time and energy. This means that once a conspiracy theorist has made up his mind, it can be extremely difficult to change those beliefs. This could also mean that it simply takes too much effort to get involved in more than one at a time.

But at the end of the day, we can only be happy flat Earthers are not climate change deniers. There are too many deniers in the world as it is, and, as ScienceAlert’s Daniel Nield points out, too many of them are in positions of power. So let’s welcome them to the world of evidence-based science! Let’s hope they enjoy their stay, and dedicate more of their efforts to understanding the science of our planet.