The Earth is flat out spherical — here’s why, and why we’re sure

The only thing flat earthers fear is sphere itself!

by Alexandru Micu
in Feature Post, Science
A A

Among all the planets zipping around through space, the Earth is unique. It’s not the water. It’s not the pleasant climate. It’s not even the fact that Earth teeming with life.

According to one pseudoscientific current out there, what makes our planet unique is that it is flat.

If you find that hard to swallow, fret not! The Earth is not actually flat, because that’s not how planets work. But since some people make a hobby, a killing on social media, or even a career out of championing the pseudoscientific cause of Flat Earth, we felt the need to push back — gently, with well-rounded facts.

Why are planets round?

The same thing that prevents you from floating out into space — gravity — is the same force that gives planets their curves.

Celestial bodies start life off as clouds of dust and gas. Then, something happens to compress all this matter, somewhere in the cloud, usually near its center. This can range from more extreme events — like a star going supernova somewhere nearby — to the mundane, such as a star or rogue planet disturbing the cloud with its gravitational wake.

The exact cause isn’t very relevant to this particular love story; some start with a bang, others with a slow and steady wooing. But, as long as that special someone comes and stirs the primordial cloud’s heart, planets will be born.

The firstborn are always stars. The increased pressure in the dust cloud brings hydrogen atoms closer and closer together. This starts a chain reaction as the center draws in more and more matter. Eventually, pressure increases enough that the hydrogen starts to fuse into helium and, tada! You have a star!

This process consumes much of the dust and gas in the cloud. For context, the Sun ate up some 99% of the matter in our system’s primordial cloud. From that remaining sliver of material, planets will accrete (form) through much the same mechanisms. Clumps of matter draw in material from the rings of dust around the star, fusing together into planets.

And here lies the crux of their roundness. Gravity draws matter in as the planet is forming. It pulls equally on all directions towards the core. It also gets more powerful the more mass a planet has. So, as the planet grows, every bit of matter gets pulled towards the center (down). In an effort to equalize strain (nature hates imbalances), these bits of matter will do everything in their power to be as close to the core as possible (a.k.a., they fall down). In three dimensions, the shape that best satisfies this requirement is a sphere.

Planets aren’t perfect spheres — they have features like mountains or valleys, and tend to form bulges around their equator — but they’re definitely, without a doubt, not flat.

Let’s assume for a second that you can make a flat planet. We’ll need a hypothetical, dense ‘core’ in the shape of a slab or disk to start with.

The problem is that this model is already unstable. Gravity as a force acts between the center of mass (COM) of two or more objects — and by mathematical definition, centers of mass are points, not volumes. Under the sway of gravity, particles will try to move as close as they possibly can to that center of mass. A slab or a disk simply has too many particles too far away from the center to be stable.

Let’s take a  slab with uniformly-distributed mass as a case study. For a slab (or ‘cuboid’ for the geometry purists out there), the COM is the same as its geometric center — you can find this point at the intersection of its diagonals or its lines of symmetry. To keep it as simple as possible, I’ll leave you with this quote from Andy Ruina and Rudra Pratap’s book Introduction to Statics and Dynamics, from a chapter on centers of mass (page 81):

“The center of mass respects any symmetry in the mass distribution of a system. If the word ‘middle’ has unambiguous meaning in English then that is the location of the center of mass.” 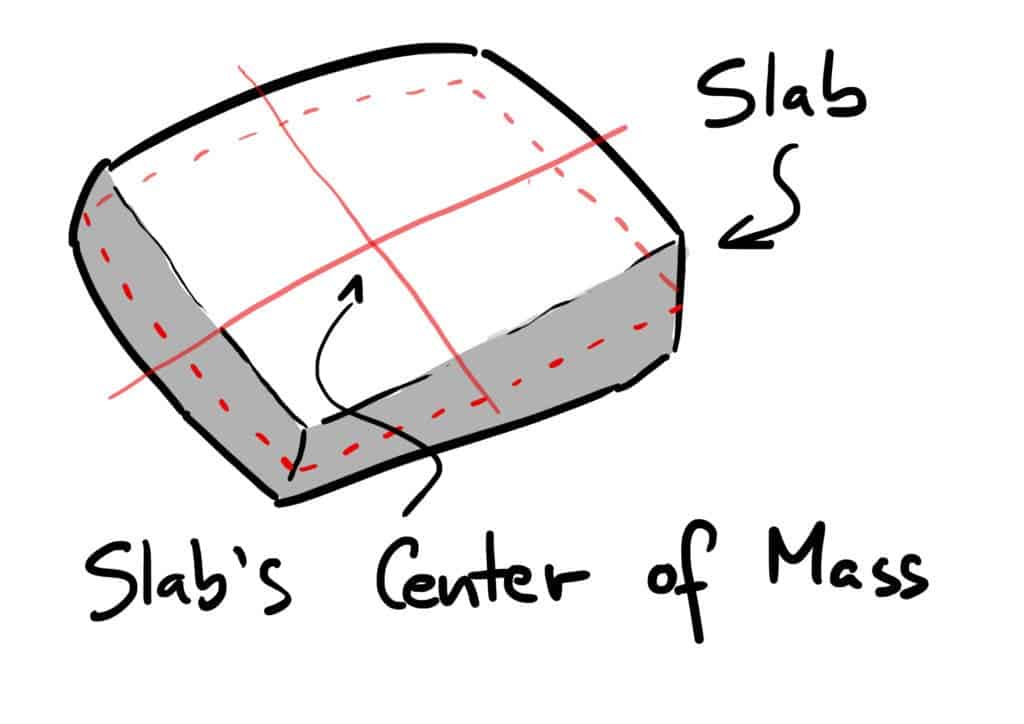 Particles on the edges of the slab, or those around the lip of the disk, are subjected to different levels of gravitational strain — i.e. they are closer or farther away from this center of mass than their peers. 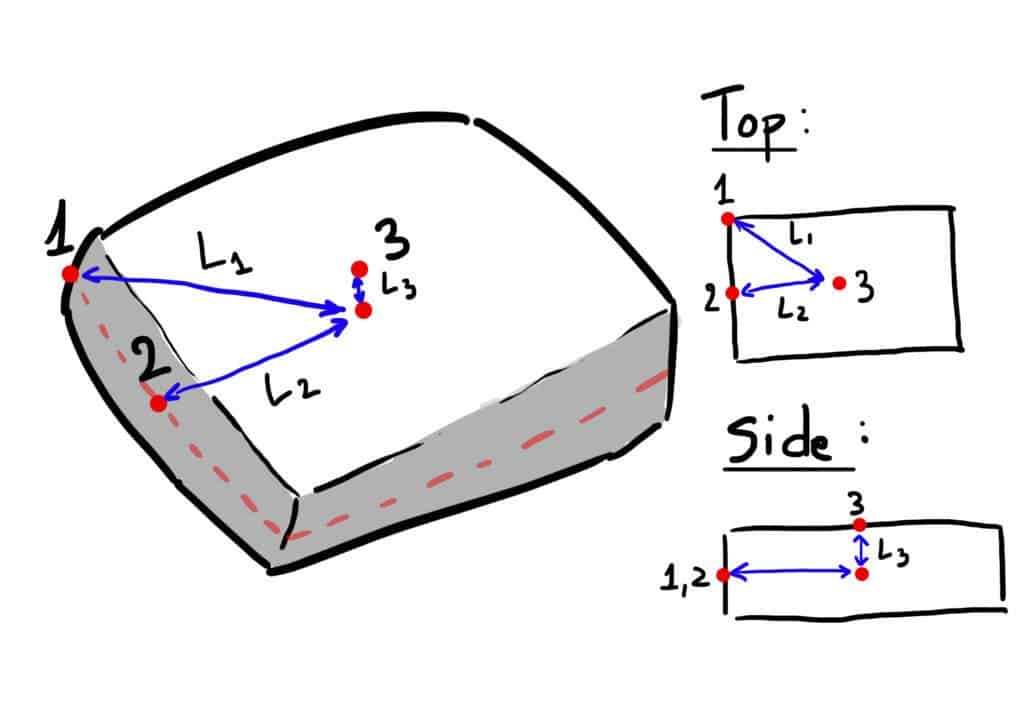 They’ll try to address this imbalance by ‘falling’ towards the center (of mass). So, in time, the edges of the slab will crumble and fall closer to the COM (so from point 1 towards point 3). In time they’ll pile around this point, further increasing its gravitational pull, drawing in more matter. Take this line of thought far enough and you’ll end up with a sphere because, in a sphere, all points are as close as possible to the center of mass.

Alternatively, if we consider the slab to be indestructible for debate’s sake, this mechanism still holds: any new material drawn by the slab’s gravitational pull will tend to pile as close to the COM as possible, in time forming a sphere.

Ok, but how do we know for sure that it’s not flat?

Well, we just talked about this, but sure.

The ancient Greeks are the first people we know of to consider a spherical Earth; the hypothesis popped up in the 5th century BC, in the works of Herodotus and later Pythagoras, to whom the spherical model is widely attributed. Since then, we humans have repeatedly shown that the Earth is, in fact, round.

A little over 2,000 years ago, a Greek mathematician named Eratosthenes (of Cyrene) — who was also the chief librarian at the Library of Alexandria — used shadows to do so. He lived in Alexandria but, the story goes, he learned that no vertical shadows were cast at noon on the summer solstice in the city of Syene, a little to the south of where he lived. Naturally, he wondered if the same would happen in Alexandria. Turned out, it didn’t. On June 21, he stuck a stick in the ground at noon and watched its shadow. It measured around 7 degrees.

Given the large distances involved, the sun’s rays are virtually parallel when they reach Earth; on a flat plane, they would hit the Earth at the same angle. But the fact that a stick in Alexandria cast a shadow while one in Syene didn’t demonstrates that these rays hit at differnt angles — that the planet is round. Eratosthenes, being the smooth Greek that he was, would go on to invent geography and calculate the Earth’s circumference. From the shadow of a stick.

The granddaddy-o of geography still doesn’t cut it? Ok, that’s fine. Let’s move on, then, to the first guy to almost-travel around (notice the subtle root-word ’round’ here) the Earth. Enter Magellan.

Loaded with money from the Spanish Crown, Ferdinand Magellan embarked on August 10, 1519, from Seville (Spain), at the lead of five ships. He sailed across the Atlantic, passed the Strait of Magellan, finally taking a little break in the province of Cebu in the Philippines. Where a bunch of natives murdered him in battle.

Sensing that things were Not Quite Right, second-in-command Juan Sebastián Elcano took charge and led the expedition back home. They arrived back in Seville on September 6, 1522, after fully circumnavigating the globe. Charles I of Spain rewarded Elcano with a coat of arms with the motto ‘Primus circumdedisti me’ (“You went around me first”).

The Transglobe Expedition (1979–1982) was the first expedition to make a circumpolar circumnavigation, traversing both poles of rotation (north and south) using only surface transport. Together with Magellan’s east-west circumnavigation, this proves that the Earth is a sphere.

Other evidence that the Earth is not flat come from multiple sources, ranging from geology to space flight.

While pseudoscientific schools of thought, flat-earthism among them, have always been around, they’re gaining a lot of ground in society today.

Part of that is owed to technology such as the Internet making it easier than ever before to share ideas and find like-minded individuals. But there’s another more worrying factor that drives this rise: an increased distrust of science and of ‘officially accepted’ narratives.

We here at ZME Science fully support discourse and the sharing of ideas, but we also feel like we have a responsibility to stand up for truth and scientific fact — for all the reasons we’ve detailed here.

The theory of flat Earth is by no means true, nor is it rooted in fact.