From Red to White: The main types of wine, with their delicious differences

Wine has been, and still is, one of the most popular drinks in human history — for good reasons. From inspiring poets and lovers to guiding research on human health, wine is found in almost all cultures from all over the world and comes in a great number of varieties. Studies have also shown that moderate red wine consumption can be healthy for you, though let’s be honest, that’s not why we drink it.

Around the world, people classify wines in several different ways. In Europe, wines are often classified by region (sometimes by grape type). Elsewhere in the world, it’s all about the grape type, and that’s the most common classification. If you want to impress your friends, improve your etiquette, or just learn more about delicious wines, this is the classification you’ll want to know (list first, then we’ll go into more details):

Of course, many other grape varieties exist throughout the world, these are just the most famous and the most commonly used — the ones you’re most likely to find both in a supermarket and in a fancy restaurant. It’s important to note that these are not different biological species, they are so-called cultivars — different varieties.

We’re dealing with rosé separately because it can be made from several types of grapes. What makes rosé wine special is the fact that it is made through the skin contact method — basically, the skins of red grapes are allowed to touch the wine for only a short period of time, thus only lending it a bit of color. Nearly any red wine grape can be used to make rosé wine, though as you’d imagine, some are better than others.

So, let’s look at the grape varieties.

Without a doubt, one of the most famous and most widely recognized types of wine. It rose to prominence through the Bordeaux wines from France (remember how we said Europe likes to classify its wines by region), and it is often blended with Merlot and Cabernet Franc for an even nobler taste. Aside from France, it’s widely grown in Italy, California, Washington, Australia, and nearly all South American States.

The word “Sauvignon” is believed to be derived from the French sauvage, which means “wild” — and this is noticeable in its taste. Cabernet Sauvignon is a full-bodied red wine, which is just a fancy way of saying that it is very rich and satisfying in flavor. It is full of tannins which give it a long after taste and an acidic feel. In terms of food, red meat is the classic pairing, but keep in mind that red meat is not good for you, and it’s not good for the planet.

Interestingly, a team led by Dr. Carole Meredith from the UC Davis Department of Viticulture and Enology conducted a DNA analysis on Cabernet Sauvignon and found that the grapes are likely the offspring of Cabernet Franc and Sauvignon Blanc, occurring as a chance crossing sometime during the 17th century. Sometimes, good things happen by accident.

Riesling is a grape variety which originated in Germany, probably in the 15th century. Although it’s not as widely grown as some of the other varieties presented here, Riesling is considered a top quality wine — varietally pure and are seldom oaked.

These wines have a light aroma, with variable sweetness and an aftertaste reminiscent of fresh apples. Traditional German food often fits perfectly with a Riesling, as does Indian, Thai, Vietnamese or Moroccan food. Some cheeses and fondue are also an excellent fit.

Riesling is a polarizing wine, with some people loving it and some people finding it too sweet or too dry (a wine is called dry when all the sugar has fermented into alcohol; a sweet wine has residual sugar). In reality, the sweetness is a winemaking decision and is not related to the grapes themselves, and there’s a great variety of Rieslings available with varying sweetness and dryness; be sure to pick something according to your taste.

Pinot Noir is one of the noblest wines, almost never blended with other varieties. This dry, light-bodied wine was first made in France (Burgundy being the chief Pinot Noir region), but it is now grown in many parts of the world. especially in cooler areas. Good Pinot Noirs can easily be found in Austria, California, Oregon, and New Zealand.

The name comes from the French words for pine (pinot) and black (noir). It’s a common misconception that the wine was named this way due to a pine-like flavor but in reality, this alludes to the tightly clustered, pine cone-shaped bunches of fruit. The aroma is actually very fruity, reminding of cherries, raspberries, and strawberries. As the grapes grow older, hints of “vegetal” and “barnyard” can add to the complexity of the wine. Cream sauces, soft cheeses, and Japanese food are excellent pairings for the wine.

Pinot Noir is also widely enjoyed by people who like to drink wine, but don’t really like the alcohol. Being a lighter wine, it is favored by more restrained drinkers, as it often has just about 12% alcohol by volume.

Syrah, also called Shiraz, has been planted extensively in the past decades, making it widely available not only in France but also in South Africa, South America, Australia and New Zealand. Still, the best Syrahs typically come from areas with granitic soils.

The wine is an intense dark red, and the aromas strongly remember of blackcurrant, with overtones of black pepper spice, highlighted by the warm temperature. Syrah has one of the warmest wine serving temperatures at 18 °C (65 °F). It’s also one of the wines favored for rosé wine and Port or Port-like fortified wines, due to its intense flavor and excellent longevity. It’s a medium-bodied wine, somewhere between the Cabernet Sauvignon and the Pinot Noir. Firm or hard cheeses are a great fit for Syrah, as are most smoky foods.

The wine should not be mistaken with Petite Sirah, which is a descendant of Syrah and Peloursin. Genetic analysis has revealed that these highly prized grapes are the offspring of two obscure varieties from southeastern France.

It’s one of the most versatile wines, being easy to pair with everything from salads or poultry to Mexican and Vietnamese food. It’s also one of the few wines that go well with desert, and one of the even fewer that go well with sushi. Dry and sweet, it’s an enjoyable taste in almost all circumstances, with aromas reminiscent of mint and herbal green, as well as (in some cases) bright exotic fruits. Sauvignon Blanc is sometimes noted as having a “bell pepper” aroma.

The wine is usually consumed young, as it’s not a prime candidate for aging. Sauvignon Blanc is a parent grape of Cabernet Sauvignon.

Chardonnay is another green-skinned grape variety originating in France, which has now become virtually ubiquitous throughout the world. Basically, everywhere wine is grown, you’re likely to find some Chardonnay because it can thrive in a variety of climates and soils. This is also exacerbated by the fact that Chardonnay is often used in the production sparkling wines, including Champagne.

Chardonnay is a dry, full-bodied wine, with rich, zesty citrus flavors (especially lemon and grapefruit), as well as vanilla, toast, coconut, and toffee aroma — when it is oaked. It works great with mushrooms, cream sauces, figs, and chicken.

For wine growers, Chardonnay is considered a “rite of passage” onto the market, because it’s easiest to grow and sell. The Chardonnay grape itself is very neutral, which also means that winemakers can work with it a lot and adapt its taste to their preference.

You would be excused for thinking that Gewürztraminer wines originate in Germany — when in fact, they originate in Alsace (a region of France). Nowadays, aside from Germany and of course, France, you can find it on the US West Coast and notably — New York.

Gewürztraminer is a highly aromatic wine, reminiscent of rose petals or lychee. Because of its broad, strong aroma, it is often considered not to be as refreshing as other white wines. The German name Gewürztraminer literally means “Spice Traminer” or “Perfumed Traminer.”

The history of Gewürztraminer is complicated, even more so by its complex genome which held many secrets to researchers. The journey of the grape variety starts with the Traminer variety, a green-skinned grape that named after the village of Tramin, located in South Tyrol, the German-speaking province in northern Italy. Tramin is one of the oldest existing wines, over one millennium old. It’s not clear exactly when Gewürztraminer emerged in its current form, but the name was first used in 1870.

Merlot is a light, easy to enjoy wine that’s perfect for new or light drinkers. It’s often used as a blend with the deeper and rougher Cabernet Sauvignon, but Merlot is a fantastic wine in its own right,

There are two styles of Merlot: the “International style” is favored especially in the New World, and produces wines with higher alcohol content and intense shades of plum and blackberry fruit. The “Bordeaux style” grapes are harvested earlier, producing lighter, fresher fruits, with red fruit flavors. It’s a highly versatile wine, suitable for virtually every meal. Still, it should be noted that Merlot tends not to go well with strong cheeses or very spicy foods, which can make the Merlot seem bitter.

In recent years, Merlot grapes have acquired a mutation creating a pink-skinned variety known as Merlot gris. Merlot is also one of the more difficult varieties to grow due to its tendency to overripen — even a few days of delay can ruin a year’s work. The name Merlot is a diminutive of merle, the French name for the blackbird, reminding of the wine’s deep, dark red color.

Zinfandel is a variety of black-skinned wine grape widely grown in Californian vineyards. The grapes are very sweet, generally resulting in wines with over 15% alcohol content. The grapes typically produce a robust red wine, but in the US, a semi-sweet rosé wine called White Zinfandel is much more popular.

The wine incorporates an exotic array of fruit aromas, from plum and blackberry to raspberry and even sweet tobacco. It’s a perfect wine for a barbecue or a good cheddar cheese. Zinfandel also fits perfectly with Italian or traditional American foods.

DNA analysis has revealed that Zinfandel emerged from is genetically equivalent to the Croatian grapes Crljenak Kaštelanski and Tribidrag, as well as to the Primitivo variety traditionally grown in Apulia. Zinfandel was brought to California in the 1850s, during the gold rush, because it made very good raisins. Planting of Zinfandel boomed soon after that, and so did wine production. 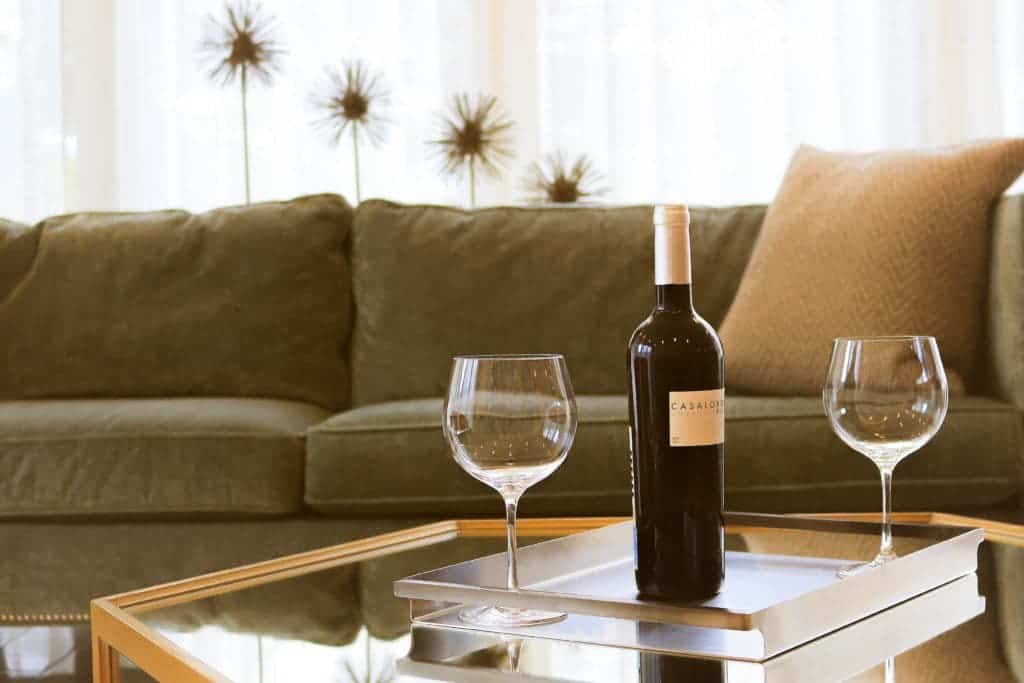 Keep in mind that these are just a few of the most popular grape varieties throughout the world — there are countless others. Just because a wine isn’t made with grapes from this list doesn’t mean it’s less valuable or not as tasty. Enjoy a high-quality wine responsibly, with quality food and quality people (or why not — alone with a good book).