Staying fit is a great way to stave off dementia

by Mihai Andrei
in Health & Medicine, Mind & Brain, News
Reading Time: 3 mins read
A A
Share on FacebookShare on TwitterSubmit to Reddit

A new study has found that women with high physical fitness are 90% less likely to develop dementia, compared to women who were moderately fit.

Although it might seem counterintuitive, dementia and physical activity are strongly intertwined. Study after study has found that staying physically fit greatly reduces the chances of developing dementia later in life. A new study strongly confirms this idea, reporting that women who are physically fit are much less likely do develop dementia — and when they do, they develop it much later in life (on average, at age 90, compared to age 79 for moderately fit women).

“These findings are exciting because it’s possible that improving people’s cardiovascular fitness in middle age could delay or even prevent them from developing dementia,” said study author Helena Hörder, PhD, of the University of Gothenburg in Gothenburg, Sweden. “However, this study does not show cause and effect between cardiovascular fitness and dementia, it only shows an association. More research is needed to see if improved fitness could have a positive effect on the risk of dementia and also to look at when during a lifetime a high fitness level is most important.”

The study recruited 191 women volunteers, average age 50. They had the women carry out a physical test (bicycle exercise) to measure their peak cardiovascular capacity. The average peak workload was 103 watts, and c for high fitness was considered to be 120 watts — 40 women were able to meet this criterion. Another 93 women were in the medium fitness category, while 59 women were in the low fitness category, defined as peak workload below 80 watts (or unable to complete the test due to high blood pressure or other physical problems). The women were then followed for 44 years, being tested for dementia 6 times. Here are the results: 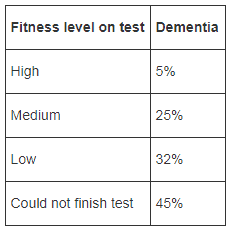 Among the women who had to stop the exercise test due to problems, 45 percent developed dementia decades later.

“This indicates that negative cardiovascular processes may be happening in midlife that could increase the risk of dementia much later in life,” Hörder said.

The results show a very strong correlation between physical activity and dementia onset. However, there are three main drawbacks to this study.

First of all, while the study was carried out over a long period of time, 191 is a fairly low sample size. Also, all of the participants were Swedish, so there’s no guarantee that findings carry out for other populations. Lastly, their fitness level was measured only once, and there’s a reasonable chance it might have changed (either for the better or for the worse) over the course of the study.

But even so, this is more and more evidence indicating that staying fit does wonders for your brain, and is one of the best things you can do to avoid the onset of dementia. Conversely, obesity correlates positively with dementia.

The study was published in the March 14, 2018, online issue of Neurology.