Bionic hands - artificial limbs controlled through thought power - they're as awesome as they sound, and they're now a reality. Three Austrian men have become real-life cyborgs after having losing their hands to injury and then undergoing innovative surgery.

by Mihai Andrei
in Health & Medicine, News, Technology
A A

Bionic hands – artificial limbs controlled through thought power – they’re as awesome as they sound, and now they’re a much needed reality. Three Austrian men have become real-life cyborgs after having losing their hands to injury and then undergoing innovative surgery, receiving bionic hands. 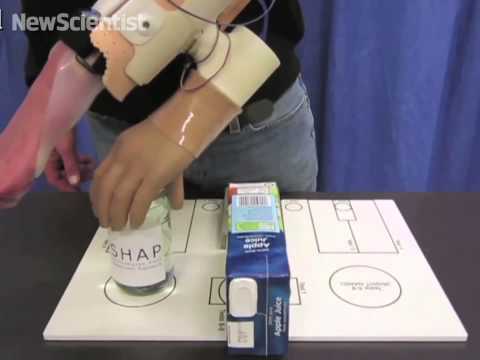 The three Austrian men suffered injuries to the brachial plexus, a critical network of nerves which links the arm and shoulder to the spine and brain. Although a part of their hand was still there, it was pretty much useless.

“In effect, brachial plexus avulsion injuries represent an inner amputation, irreversibly separating the hand from neural control. Existing surgical techniques for such injuries are crude and ineffective and result in poor hand function,” explains Professor Oskar Aszmann, Director of the Christian Doppler Laboratory for Restoration of Extremity Function at the Medical University of Vienna

Three months ago, in a landmark surgery, all three of them underwent bionic reconstruction – their useless limb parts were replaced with artificial components. Today, for the first time in years, all three were able to accomplish everyday tasks such as picking up a ball, drinking water, cutting with a knife and opening their buttons using their bionic, thought-controlled hands.

“The decision to let go of his own hand is definitely not an easy one. Why? Because the patient still has a hand. But you must not forget that these patients have lived without hand function for about ten, 15 years and they know what it means to live without hands,” explained Professor Oskar Aszmann.

In order to do this, the surgical team transplanted nerves and muscles from their legs to their arms.

While there have been many advancements in the field of smart prosthetics, this is still the first time this type of surgery has been done. The fact that it was done on three patients and was successful in all cases is extremely encouraging, but we still have to wait a while before assessing the long term impact.

“So far, bionic reconstruction has only been done in our centre in Vienna,” added Professor Aszmann, “However, there are no technical or surgical limitations that would prevent this procedure from being done in centres with similar expertise and resources.”

The problem when you try to integrate biological functions with mechanical functions is that in time, the cooperation tends to drop in time. Professor Simon Kay who carried out the UK’s first hand transplant, and Daniel Wilks from Leeds Teaching Hospitals NHS Trust, Leeds, UK believe this type of procedure will raise significant challenges in the future:

“The present findings—and others—are encouraging, because this approach provides additional neural inputs into prosthetic systems that otherwise would not exist. However, the final verdict will depend on long-term outcomes, which should include assessment of in what circumstances and for what proportion of their day patients wear and use their prostheses. Compliance declines with time for all prostheses, and motorised prostheses are heavy, need power, and are often noisy, as well as demanding skilled repair when damaged.”

Either way, no matter how you look at it, the fact that we are now able to create artificial limbs which we can control with our brains is absolutely spectacular.

The study detailing the procedure was published in The Lancet.