Marijuana is much safer than tobacco and alcohol, study concludes

A new study has concluded that marijuana is much safer than alcohol and tobacco combined. Alcohol is actually the most dangerous substance out of the ones studies - more dangerous than heroin, cocaine, ecstasy or meth. 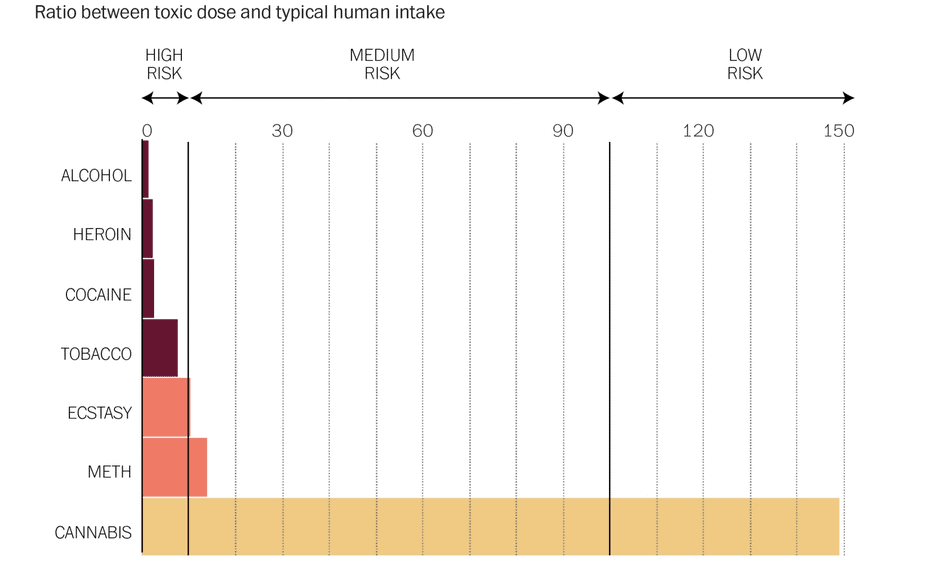 Researchers sought to quantify the risk of death associated with the use of a variety of commonly used substances – be they legal or illegal. Despite often being thought of as similar in some regards, weed and alcohol are actually on opposite ends of the spectrum – with weed being 114 times safer than alcohol.

“The toxicological approach validates epidemiological and social science-based drug ranking approaches especially in regard to the positions of alcohol and tobacco (high risk) and cannabis (low risk)”, the study reads. “Our results confirm previous drug rankings based on other approaches. Specifically, the results confirm that the risk of cannabis may have been overestimated in the past”.

The study used a slightly different methodology than previous research, but their results are coherent with previous reports. They used the margin of exposure (MOE) approach. The MOE is defined as ratio between toxicological threshold (benchmark dose) and estimated human intake.

Still the fact that alcohol is more dangerous than heroin for example should not be understood as the pound per pound danger – much of the dangers related to the drug consumption (alcohol included here) come not directly from consumption, but also from the environmental conditions and secondary effects.

Of course, weed being “safer than alcohol” doesn’t make it “safe” – it’s still not a recommended substance, it just means that the risks have been overestimated by both medical researchers and policy makers. There are still risks associated with marijuana consumption – like sleep impairment, a halt in brain development and a loss of overall pleasure in life. But this being said, many common substances can have significant negative effects – eat too much sugar and you’ll become overweight, have bad teeth and maybe even diabetes. The difference is in the way these substances are managed.

“Many governments in Europe have favoured more restrictive policies with respect to illicit drugs than for alcohol or tobacco, on the grounds that they regard both illicit drug abuse and related problems as a significantly larger problem for society. Drug rankings can therefore be useful to inform policy makers and the public about the relative importance of licit drugs (including prescription drugs) and illicit drugs for various types of harm,” authors say. In other words, we’re dealing with a double standard here – alcohol and tobacco, which are much more dangerous then marijuana are legal, while marijuana is illegal.

I just wish organizations fighting against marijuana legalization would focus on more dangerous substances – like alcohol and tobacco. Legal drugs are killing us more than illegal drugs.

“Currently, the MOE results point to risk management prioritization towards alcohol and tobacco rather than illicit drugs. The high MOE values of cannabis, which are in a low-risk range, suggest a strict legal regulatory approach rather than the current prohibition approach”, the study concludes.