Yeast chromosome engineered from scratch: creating cretures in a lab

by Tibi Puiu
in Biology, Genetics, Health & Medicine, News, Research
A A

In a huge breakthrough in synthetic biology, scientists at Johns Hopkins University have engineered from scratch a yeast chromosome. This is the first time scientists have been able to assemble a chromosome from a creature as complicated as a yeast, namely a prokaryrite. The implications of this research are far and wide. For one, the developments at Johns Hopkins provide an invaluable learning tool and launching platform for future research in synthetic biology. More immediate applications include the biofuel industry and of course beer.

Humans have been growing yeast for practical purposes ever since they figured out how to brew beer and bake bread thousands of years ago. Through selective breeding and close manipulation, mankind has been essentially engineering yeast for a long time. This time, however, the researchers led by Jef Boeke have gone the extra mile and genetically engineering an entire organism (the yeast) from scratch.

Their work involved designing and writting a code made up of roughly 11 million letters of DNA—the As, Cs, Gs, and Ts that write the book of life. This code was synthesized and subbed in for a yeast’s natural DNA, thus obtaining a brewer’s yeast’s DNA with a completely altered  chromosome. Chromosomes are organized structures of DNA and proteins that are found in cells. A chromosome is a singular piece of DNA, which contains many genes, regulatory elements and other nucleotide sequences. Chromosomes vary extensively between different organisms. The DNA molecule may be circular or linear, and can contain anything from tens of kilobase pairs to hundreds of megabase pairs. Typically eukaryotic cells (cells with nuclei) have large linear chromosomes and prokaryotic cells (cells without defined nuclei) have smaller circular chromosomes, although there are many exceptions to this rule.

For instance, each human cell contains 23 chromosome pairs, for a total of 46. The man-made yeast chromosome represents about three percent of all of the DNA that makes a yeast.

In 2010, the J. Craig Venter Institute reported a landmark advancement in synthetic biology, after scientists there built all of the DNA for a bacteria from scratch. Yeasts are one level up bacteria, however. While they’re both single-celled organisms, yeasts are eukaryotic, in the same group as plants and humans, while bacteria are eukaryotic, similar to the very first living things that formed on Earth billions of years ago.

“The synthesis and design of the first eukaryotic chromosome is obviously an exciting milestone,” says Farren Isaacs, a cell biologist at Yale University who was not involved in Boeke’s team. “Eukaryotic” refers to the grouping of life that yeast belong to.

Genetically modified organisms have come a long way in recent years, but while researchers have concentrated their efforts on designing organisms marginally similar to those born from pure evolution, adding or deleting just a couple of genes here and there, the new yeast is proof of an entirely new organism, engineered from scratch. 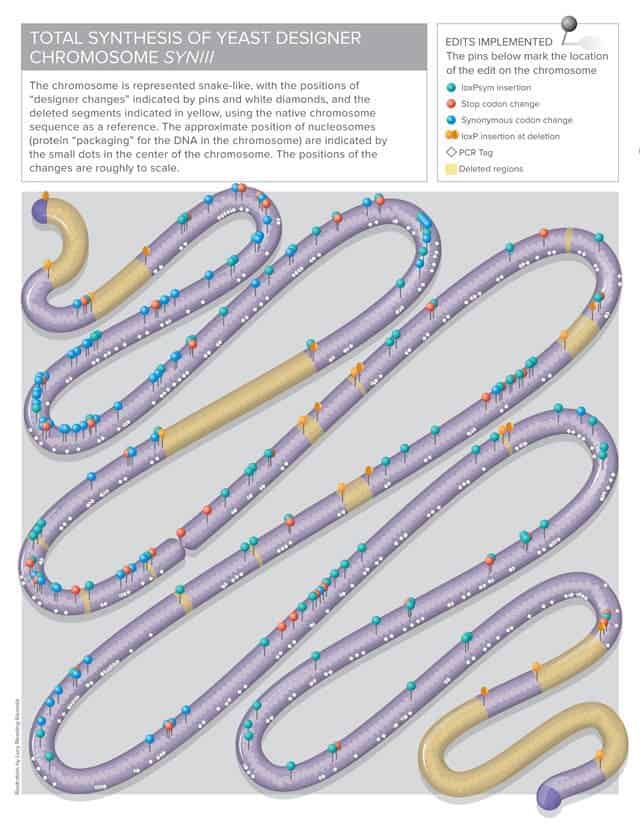 So their beer yeast isn’t just some carbon copy of nature, but an entirely new one – an improved version, some may say. A lot of DNA was trimmed down, parts of redundant or unnecessary segments of code called “junk DNA”. The researchers even added some stretches of DNA that give the chromosome a latent superpower that doesn’t come into play unless it’s triggered.  “It’s almost akin to being able to trigger evolution,” Isaacs says.

To test if the synthetic version with the cut out chromosome III can support yeast life, the researchers simply added the chromosome back into the yeast from which the natural version was removed. In the lab, the hybrid grew and reproduced just like its cousins.  “It looks like it, it behaves like it, it smells like it,” Boeke says. “Basically, you wouldn’t know the difference unless you take the next step and introduce what we call the genome scrambling system into it.”

There’s been a lot of talk about junk DNA, however. For instance, it’s been found before that what scientists used to call redundant genetic code turned out to be pretty useful. It’s just that some code becomes active only in particular situations. It could be that if yeast is subjected to particular environmental stimuli, like a specific temperature or pressure, it may not survive or behave differently than its natural brethren. If this happens, then it may be for the better since it would show that the cut-out genes actually do something providing an excellent learning tool.

“So what we’re doing is, in some sense, a risky business,” Boeke says. “There’s not a flag on each segment saying ‘this one’s not important’. It’s really a judgment call at a certain stage.” Luckily, yeasts, like fruit flies and mice, are one of the best-understood organisms in all biology, so the scientists relied on a huge genetic database to guide them. “But if we make a mistake, as we’ve found in some of our unpublished work, the penalty could be a dead yeast,” he says. “So we were pretty conservative.”

The future of beer

Yeast is an important component in brewing and in most beers, it’s responsible for the dominant flavour. Some yeasts make for a good flavour, but they ferment too little alcohol, which can be frustrating for research scientists at breweries. A modified synethic yeast could solve many issues. But would you drink a genetically modified beer? Some brands stay away from GMO hops because they offer their consumers all-natural flavour. So a more likely candidate for synethic yeast may be the biofuel industry where GMO corn ethanol is widely produced.

Findings appeared in the journal Science.