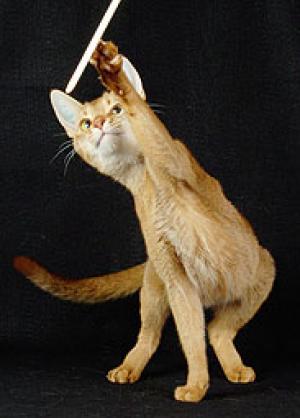 Not a long time ago scientists have sequenced chimpanzee, mouse, rat, dog, and cow DNA. This made it possible for them to understand numerous things including the hundreds of chromosomal rearrangements that have occurred among the different lineages of mammals since they diverged from a diminutive ancestor that roamed the earth among the dinosaurs some 100 million years ago.The cat used for sequencing is a 4-year-old Abyssinian cat named Cinnamon. This genome sequence analysis is bound to lead to some important findings in medicine for cats as they have over 250 naturally occurring hereditary disorders. But the cat serves as a good model for studying human disorders; in fact this is the reason why the National Human Genome Research Institute (NHGRI) initially authorized the cat genome sequencing about three years ago.

Scientists used the data from the DNA sequencing and they identified several hundred thousand genomic variants which give clues about the genetic basis of numerous hereditary conditions. They found other interesting things such as microRNAs, Numts (pronounced “new mights”–nuclear genomic fragments that migrated to cat chromosomes from mitochondria) and they found a link between repetitive elements and some retroviruses which could cause cancer.

The study showed that Cinnamon’s pedigree carries a genetic mutation that causes retinitis pigmentosa, a degenerative eye disease that can lead to blindness and is harmful for humans. Cinnamon is shy and reticent, preferring to sit quietly and watch the other cats play and carouse. This sequencing could help her and other 1 in 3,500 people affected by this condition