by Tibi Puiu
in Animals, Genetics
Reading Time: 3 mins read
A A
Share on FacebookShare on TwitterSubmit to Reddit

It is generally believed that a cloned animal is identical to its host from where cells were initially harvested, however this may be wrong. Researchers at the  National Veterinary Institute at the Technical University of Denmark have provided evidence that suggests cloned pigs are just as genetically varied as normally bred pigs, supporting the idea that cloning as it is performed today is far from being perfect. The findings are the latest in a number of similar reports from other Universities, calling for attention to the matter and consideration of this fact when carrying research on cloned animals – especially in the field of medicine.

Currently it is believed that cloned animals are more akin to one another compared to normally bred animals, since they are copies of one another just like identical twins are. This means they have fewer genetic variants, allowing scientists to gather results with fewer specimens at hand. Researchers from Denmark however argue that this isn’t true, and that actually  pig clones are often highly varied and also respond differently than non-clones – which goes against the popular belief.

For their study, the researchers looked at how the immune system of cloned and normally bred pigs responded to obesity. Comparisons were made of so-called acute phase proteins in the blood and of the gene expression of immune factors in three types of adipose tissue and in liver tissue.

Their findings suggest that cloned animals have an altered immune system compared to normally bred ones. For instance, the amount of acute phase proteins in the blood increases dramatically during inflammation, however for the clones the levels of some markers were upregulated in relation to the levels in the non-cloned group.

Most importantly, though, it was observed that the variation in the expression of these genetic markers was just as great for cloned pigs as in non-cloned pigs. As an analogy, this is as saying that a quintuplets’ innate immune systems are as different as five regular siblings’. This means cloned animals are indeed different. 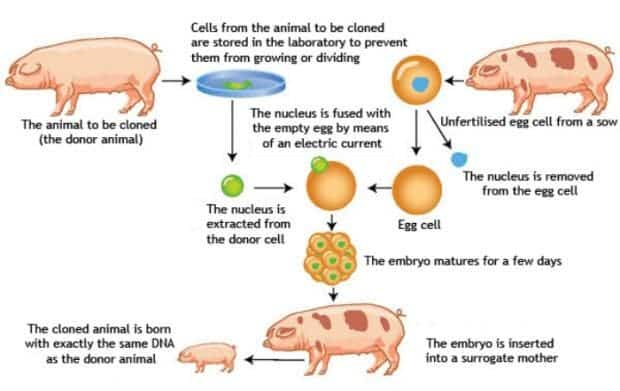 It was also observed that cloned animals behave differently from non-cloned animals. For instance cloned pigs were more fearful and anxious than naturally bred pigs. They also weigh less and are often found to have a higher metabolism than non-clones.

Part of the explanation lies in the current methods of cloning, which disrupt the sensitive processes that take place during embryonic development. Then there’s epigenetics – heritable changes in gene expression, which are not caused by changes in the underlying DNA sequence. In other words, you can have two pigs with identical DNA sequences however these cloned animals will be far from being identical since they’ll express completely different genes and thus make them look entirely different.

Hence, researchers have yet to crack the code on how we can control genomic imprinting. Until this happens, the perfect clone is still out of reach. Now, this knowledge is highly important to consider, especially since a lot of scientists working with clones apparently aren’t fully aware of this, according to the Danish researchers.