Inaccuracy in the genetic makeup can lead to deficiencies that alter how color should be perceived in optimal conditions.

by Mihai Andrei
in Health & Medicine
Reading Time: 4 mins read
A A
Share on FacebookShare on TwitterSubmit to Reddit

While humans have the capability to interpret over 1,000,000 different colors, not all humans possess the genetics that will allow that kind of color fluctuations to be perceived. Inaccuracy in the genetic makeup can lead to deficiencies that alter how color should be perceived in optimal conditions.

Color Perception Outside the Eye 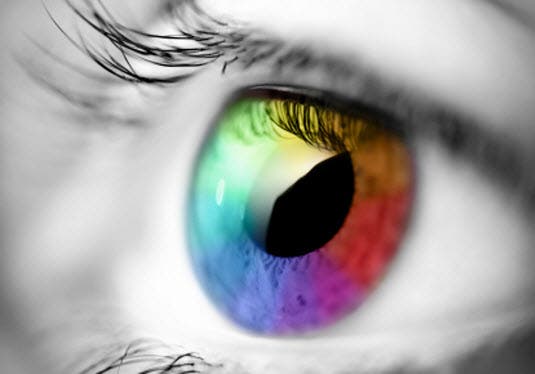 The ability to perceive color begins when electromagnetic waves in the form of light reflect off an object. The reflection carries the visual color wavelength to the gadget, human or animal that is able
to perceive the color. In order for color differences to be perceived, the eye has to be capable of cracking the code with the right information sheet.

The eye perceives color when certain wavelengths of light are reflected off the object and enters the eye through the lens. The message is then sent to the retina where photoreceptors in the shape of cones or rods interpret the message. Color vision is interpreted by the cones.

Within the cones are three kinds of photosensitive receptors that interpret different wavelengths based on the makeup. Normally each cone is responsible for interpreting a different range of wavelengths: long, medium or small, or red, green, or blue sensitive wavelengths. The LMS title is more accurate because the capabilities of each cone overlap. While the cones responsibilities do overlap, a cone not interpreting its range of responsibly could lead to an inability to perceive or distinguish certain colors.

Color Perception Deficiencies: Who is affected and Why

In a study conducted by DM Hunt in 1991, he found that 8 percent of men and .4 percent of women were affected by some variation of color deficiency. It becomes clear with this study that men and women are not equally likely to be unable to perceive the full spectrum of colors available with the three-cone photopigment types.

The ability to perceive color is a “sex-linked genetic trait.” Like many other diseases and genetic anomalies, color perception comes down to the genetics passed down from the mother or father through the x chromosomes. Women who have two x chromosomes have two chances to receive the DNA strands that allow for the full spectrum of color vision. Men only receive one chromosome from the mother, so if the mother’s family has a history of color perception deficiencies, he will have a higher chance of color blindness. If the mother is colorblind, the son will be as well.

There are multiple types of color deficiencies that people may possess.

The first type is the inability to distinguish between certain colors due to a missing photopigment type. Within this category there are three types that can be missing.

Another type of color deficiency is called anomalous trichomacy. People affected by Protanomaly, Deuteranomoly, or Tritanomaly have a reduced ability to distinguish between the hues effected because
of either a weak sensitivity in the L, M, or S cone or a “contamination of photopigments.” That is to say that some larger or smaller wavelength sensitivity is present where they should not be.

Thinking about how genetics are combined to form new life seems to be the activity of scientists, introduction biology classes, and people looking for potential sperm donors. We hardly ever make up a questionnaire listing all the undesirable genetic treats that we might pass on to our offspring. And when it comes down to it, the inability to distinguish color is a minor issue; a genetic hiccup that causes some inconvenience in certain social situations. Until a potential cure is found, if one is even needed, the best thing that people with a color perception deficiency is to know about it and come up with ways to compensate for it. The only other alternative at this time is eugenics—and that has the potential of going south fast.