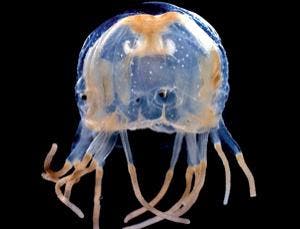 The box jellyfish (commonly known as the sea wasp) is not only the most venomous creature in the world, but it also holds a few other major surprises. They may seem like rather simple creatures at a first glance, but researchers are now convinced they are nothing like this; as a matter of fact, they have no less than 24 eyes, of four different types, which makes them among the creatures with the most interesting eyesight in the world. The sea wasp uses these eyes to navigate the waters it lives in.

“It is a surprise that a jellyfish — an animal normally considered to be lacking both brain and advanced behavior — is able to perform visually guided navigation, which is not a trivial behavioral task,” said Anders Garm of the University of Copenhagen. “This shows that the behavioral abilities of simple animals, like jellyfish, may be underestimated.

Scientists have long known that the sea wasp has a unique array of eyes, but they didn’t even suspect just how unique and special it was; it was known that they could rely on vision to respond to light, avoid obstacles, and control their rate of swimmin, but box jellyfish live in seas with a multitude of obstacles, so this is no major surprise.

The species they investigated, Tripedalia cystophora lives in a special environment, in the swamps formed by the Caribbean mangrove roots, where it always stays close to the surface, and they are never found in the open, where they risk starvation.

“We have shown that the box jellyfish can use vision to navigate in their habitat, and we now want to understand how their simple nervous system supports such advanced behaviors,” Garm concluded.