NIH to retire most of its research chimps, report says

by Tibi Puiu
in Animals, Health & Medicine
A A 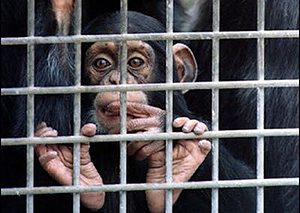 Clear and solid steps have been taken in the past few years to cancel research, experiments and drug testing on chimps, a practice which is still legal in only two countries in the world: the US and Ghana. Recently, the US National Institutes of Health (NIH) was advised to retire its decade-old, 360 chimpanzee-strong colony to a national sanctuary. Some 50 chimpanzees will continue to remain in research facilities, but only if the research performed on them is considered to render important benefits to mankind.

The long awaited announcement delivered from a working group of external agency advisors comes a year after an important report by the US Institute of Medicine condemned the use of chimps for medical research and recommended their dismantlement after much debate, in light of ever growing evidence that chimps are very similar to humans and fearsome ethical discussions.

“Clearly there is going to be a reduction in the use of chimpanzees in research,” says working group co-chair Kent Lloyd, the associate dean for research at the School of Veterinary Medicine at the University of California, Davis.

The NIH committee traces clear restrictions for chimp research, calling for the cancellation of about half of 21 existing biomedical and behavioural experiments and the establishment of sanctuary housing for the retiring animals “immediately”. The committee goes on to add that some 50 chimpanzees are enough for future research, and this only after an independent committee would vet individual study proposals after they first pass routine NIH scientific review. In short future research that includes chimpanzees would have to prove that no other animal or biological model is available and the potential benefits to mankind are of great importance.

With this in mind, three of nine ongoing invasive experiments, involving immunology and infectious diseases, could continue, because they meet the IOM criteria and eight of 13 behavioural or comparative genomics studies could be allowed to continue, but in some cases only conditionally.

Last month, the agency announced that it will retire 110 chimpanzees to the national Chimp Haven sanctuary in Keithville, Louisiana; these 360 chimpanzees come in addition.

Of course, the announcement was met with great enthusiasm by animal rights activists, while some scientists point out that currently chimpanzees are the only animals where important medical research testing can be performed; research that might offer solutions, treatment and cures to afflictions, infections and diseases that currently plague mankind causing millions of deaths every year.