The US is debating the use of chimps in medical research

by Tibi Puiu
in Diseases, Health & Medicine, Research
A A

The United States and Gabon are the only countries left in the world that are still using chimps for medical research. While research made on our closest relatives is considered invaluable by scientists studying deadly diseases such as HIV, animal rights activists are pressuring the authorities to ban the use of chimps in research labs, considered cruel by all means. This was the subject of debate opened at a Institute of Medicine (IOM) conference this weekend. 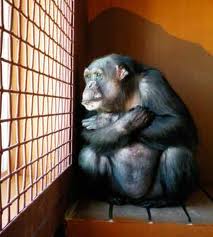 It’s well known that once chimps reach the confinements of a lab cell, they become socially withdrawn, agitated – most became traumatized. In the U.S. there are currently 1.000 medical research chimps. The European Union banned lab chimps last year, and pharmaceutical companies nowadays have almost exclusively turned to cheaper alternatives (chimps are the hardest lab animals to care for, and thus deemed expensive).

“If you’re a scientist, a chimp is really a sort of last resort,” said Harold Watson, who directs the chimpanzee research program at the National Institutes of Health, which manages 734 of the nearly 1,000 medical research chimps in the United States.

Now, the IOM debated the fate of nearly all the medical research chimps left in the world.

Through the constant experimentation on chimps along the years, significant progress has been made in the medical field, like vaccines against hepatitis A and B, in which chimp research was considered crucial. Scientists studying hepatitis C say that chimps are vital to their work as the only lab animal susceptible to the virus.

Just because chimpanzees have the closest matching DNA to humans, it doesn’t mean that they’re susceptible to the same diseases as humans, though. Although extensive HIV studies were made on chimps in the 1980s and 1990s, scientists have found that rhesus monkeys are more likely to mimic human-like HIV infections, for example. So, having a similar DNA, doesn’t necessarily mean that two species will be affected similarly by a disease.

Biomedical research chimp numbers have dramatically declined in recent years, as scientists turn to other alternatives like mice or other means that new technology has been able to offer. Actually, scientists have now been able to engineer mice with more human-like immunity for hepatitis studies, which might release chimps of their principal cause of use.

“We are more than halfway” to mice that could replace chimps in hepatitis studies, Alexander Ploss of Rockefeller University said. “Whether we have that mouse in two years, five years, 10 years . . . who knows?”

Ethics and medical science, acting in the most honest good interest of humankind, have clashed for a long time whenever chimp reserach was concerned. Both sides have a solid say, and the matter is far from an easy solving in the near future.

“We wouldn’t be having this meeting if ethics wasn’t an issue,” Frans de Waal told the IOM committee. The Emory University researcher, whose pioneering studies with captive chimpanzees have revealed their human-like empathy, continued, “We don’t have this kind of meeting about rats.”