Medical research on chimps will no longer be performed

by Mihai Andrei
in Animals, Research
Reading Time: 2 mins read
A A
Share on FacebookShare on TwitterSubmit to Reddit

Concluding a debate which lasted for over 7 months, the US Institute of Medicine has released a report that marks a turning point for chimpanzees, our closest relative, in terms of medical research. The panel laid out some stringent rules against all current and future chimp research, installing some dramatic penalties to those who disobey. 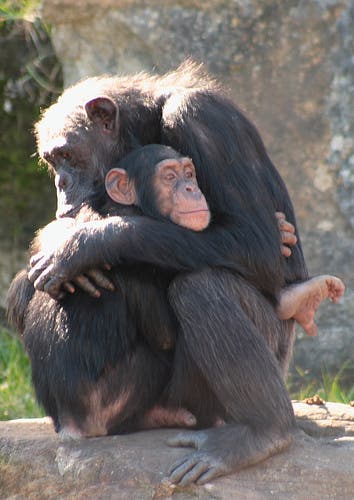 This result comes mostly as a result of us understanding that, among others, chimps are capable of so many feelings and thoughts, including grief, happiness, empathy, and they have a basic sense or morality; as a result, subjecting them to any kind of disease, pain or psychological trauma can be qualified unethical by all human standards. It’s a fine line to draw in the sand, and in my opinion, we should have drawn it way before chimps, but it’s a good start nonetheless.

At the same time, from a more cynical yet just as true point of view, this measure was adopted because there simply isn’t as much use for research on chimps than there was before. Researchers are now doing a lot of cell research inside Petri dishes, working on stem cells and so on.

However, they did leave a backdoor open, stipulating that chimps can be used for research when there isn’t a similar model available, and when not doing the research would cause a significant delay or stoppage in important research.