A discussion of tremendous importance for the internet was taking place these days, although most of us weren't even aware of it.

by Mihai Andrei
in News, Technology, World Problems
Reading Time: 3 mins read
A A
Share on FacebookShare on TwitterSubmit to Reddit

New net neutrality guidelines from the Body of European Regulators for Electronic Communications (BEREC) confirm strong protection for net neutrality – ensuring the state of the open web as we know it. 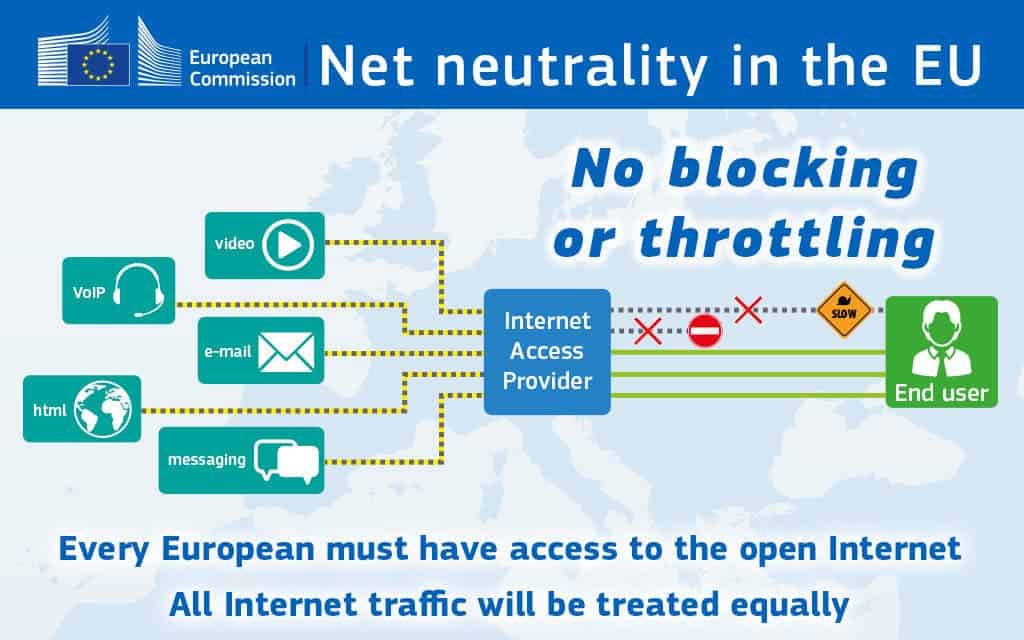 A discussion of tremendous importance for the internet was taking place these days, although most of us weren’t even aware of it. Europe’s telecommunications regulator was debating how to regulate some loopholes regarding internet service providers (ISPs).

“Europe is now a global standard-setter in the defence of the open, competitive and neutral internet. We congratulate BEREC on its diligent work, its expertise and its refusal to bend to the unreasonable pressure placed on it by the big telecoms lobby”, said Joe McNamee, Executive Director of European Digital Rights (EDRi).

Net neutrality means that all internet traffic is treated equally, without blocking or slowing down different websites or information sources. Let’s take an example. If this wouldn’t be the case, then your internet provider would be allowed to keep Netflix streaming at full speed, while significantly slowing down Amazon or any other source (if they had an agreement in this sense).  Naturally, they’d create a bias towards watching Netflix.

But it goes even deeper. Your provider could, for instance, block or slow down some media outlets, directing you to the sources of information it wants. Basically, it could indirectly direct people to one website or another.

Ensuring that the open web stays the way it is is vital not only for a healthy competition between all websites, but also to avoid potential mass manipulation by ISPs. If you want, it’s a way to keep the internet free and open for all – and this is exactly what was decided in Europe.

“ISPs are prohibited from blocking or slowing down of Internet traffic, except where necessary,” BEREC said. “The exceptions are limited to: traffic management to comply with a legal order, to ensure network integrity and security, and to manage congestion, provided that equivalent categories of traffic are treated equally.”

So why was this debated anyway?

As the Verge writes, the net neutrality rules adopted by the European Parliament last year aimed to strengthen net neutrality by requiring internet service providers to treat all web traffic equally, without favoring some services over others. However, these regulations contained several loopholes which could have been abused, especially by allowing ISPs to create “fast lanes” for “specialized services.” If you’re deciding between reading two online newspapers for instance, the speed at which they load can be a deciding factor, and if your ISP tampers with the load speed, then that’s also a form of manipulation. Thankfully, this won’t be the case.

“ISPs are prohibited from blocking or slowing down of Internet traffic, except where necessary,” BEREC said. “The exceptions are limited to: traffic management to comply with a legal order, to ensure network integrity and security, and to manage congestion, provided that equivalent categories of traffic are treated equally.”

Both as individuals and as a publisher, we support net neutrality. This is a global issue of paramount importance, with the potential of affecting our lives in a great way. Thankfully, net neutrality has enjoyed victories in the USA, India and Latin America, and now Europe has joined in as well.

But society must remain vigilant. It’s up to the civil society, to you and I, to make sure that these rules are enforced and that other forms of internet manipulation don’t creep up on us.