A small start-up brought self-driving taxies to the streets.

by Alexandru Micu
in Environment, News, Science, Tech
Reading Time: 4 mins read
A A
Share on FacebookShare on TwitterSubmit to Reddit

This Thursday, Singapore will become the first city in the world to use self-driving taxis.

With huge players such as Google or Volvo toying around with self-driving cars on public roads, most of us probably expected that the future fully automated vehicles we’d zip around in would be developed by one such huge company. But, for a handful of Singapore residents, the future is now — and it’s brought by the small, autonomous vehicle software startup nuTonomy. The company will become the first to ever offer the public a chance to ride in autonomous vehicles, beating ride-hailing service Uber — which plans to offer a similar service in Pittsburgh — by a few weeks.

Their fleet will start out small, six cars right now, but will double by the end of the year. Their end goal is to have Singapore’s taxi system fully automated by 2018, NuTonomy officials said. This will drastically reduce the numbers of cars clogging Singapore’s congested roads. But there’s nothing to stop them from expanding the model to other cities later, they added.

Right now, however, the taxis will only operate in a 2.5-square-mile office and residential district known as “one-north,” with specific pick-up and drop-off locations. The users will have to receive an invitation from nuTonomy to use the service, and the company says dozens have signed up for the launch, with several thousands more expected to join within the next few months.

NuTonomy vehicles — modified Renault Zoe and Mitsubishi i-MiEV electric models — will be fitted with six sets of Lidar to help it navigate its surroundings, including one that spins on the roof for a full 360-degree field of detection. Lidar is a system very similar to radar, only it uses laser beams instead of radio waves. Two cameras installed on the dashboard will scan for obstacles and detect changes in traffic lights. And, if all these fail, there’s a human driver in the front seat ready to take the wheel in an emergency, and a researcher in the back monitoring the car’s computers. 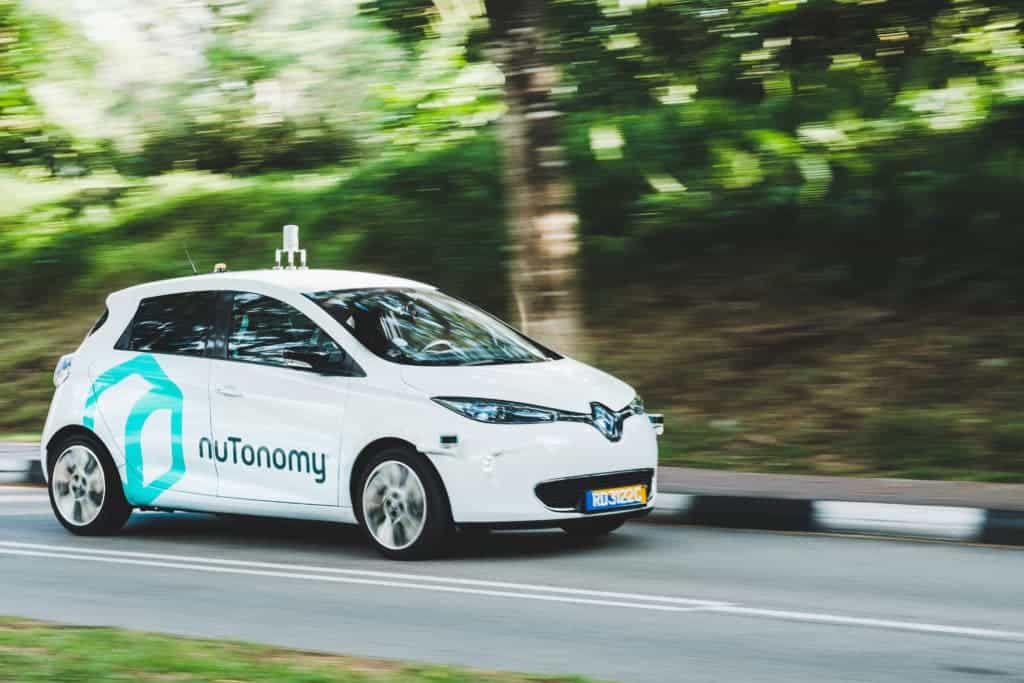 The testing time frame is open-ended, said nuTonomy CEO Karl Iagnemma. Users will eventually start paying for the service, as more pick-up and drop-off points are added. He also said that company plans to test similar services in other Asian, European, and U.S. cities, but didn’t give any dates or places.

“I don’t expect there to be a time where we say, ‘We’ve learned enough,'” Iagnemma told the Associated Press.

Doug Parker, nuTonomy’s chief operating officer, says that their autonomous taxis could reduce the number of cars on Singapore’s roads by two-thirds, from 900,000 to some 300,000 cars.

“When you are able to take that many cars off the road, it creates a lot of possibilities. You can create smaller roads, you can create much smaller car parks,” Parker added. “I think it will change how people interact with the city going forward.”

NuTonomy was formed in 2013 by Iagnemma and Emilio Frazzoli, two Massachusetts Institute of Technology researchers working on robotics and autonomous vehicles for the Defense Department, and currently has offices in Massachusetts and Singapore. They received Singapore’s approval to test self-driving cars in one-north earlier this year, and it announced a research partnership with Singapore’s Land Transport Authority earlier this month. Pretty impressive for a 50-man strong company.

“We face constraints in land and manpower. We want to take advantage of self-driving technology to overcome such constraints, and in particular to introduce new mobility concepts which could bring about transformational improvements to public transport in Singapore,” said Pang Kin Keong, Singapore’s Permanent Secretary for Transport and the chairman of its committee on autonomous driving.

Users are reporting that nuTonomy’s taxis work like a dream. Olivia Seow, one of the riders the company selected, took a one-mile ride on Monday. She said she was nervous at first, then surprised as the steering wheel started turning by itself.

“It felt like there was a ghost or something,” she said.

The ride was smooth and controlled, she said, and she was relieved to see that the car recognized even small obstacles like birds and motorcycles parked in the distance.

“I couldn’t see them with my human eye, but the car could, so I knew that I could trust the car,” she said.

An Associated Press reporter took a ride on Wednesday and reported that the safety driver had to step on the brakes once when a car was obstructing the test car’s lane and another vehicle, which appeared to be parked, suddenly began moving in the oncoming lane.

Iagnemma is confident that the software can be relied on to make good decisions. For the future, nuTonomy hopes to eventually partner up with automakers, tech and logistics companies and other industry leaders to further the development of autonomous vehicles.

“What we’re finding is the number of interested parties is really overwhelming,” he said.