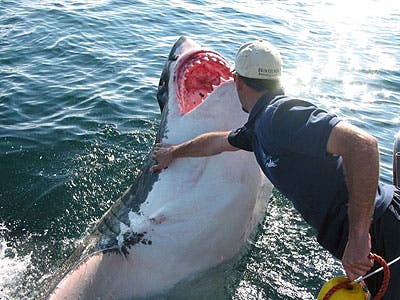 Sharks are some of the most fascinating creatures to ever have “walked” the face of the planet; the best argument for this claim would be that they stand alons on the top of the food chain, with no natural enemy, other than humans, of course. Among the species of sharks, a few stand out as true silent killers of the deep, and among these, one of the most interesting ones is the great white shark.

A first of its kind census regarding the number of these toothed animals revealed startlingly low numbers; as it turns out, there are only 219 adult and young adults in all the entire northeast Pacific Ocean.

“Once we went out and noticed that we were seeing the same sharks every year, it started to dawn on us that this population isn’t huge,” UC Davis doctoral student Taylor Chapple, the study’s lead author, told FoxNews.

“This low number was a real surprise,” Chapple said. “It’s lower than we expected, and also substantially smaller than populations of other large marine predators, such as killer whales and polar bears.”

Sadly, the image of these underwater predators has been greatly distorted by the media, thanks to ‘Jaws’, and a multitude of other movies in the same line. Sharks are nature’s ultimate killing machine, and it breaks my heart to see such admirable animals face such a fate, which they cannot escape.