“Feeding nine billion people in a truly sustainable way will be one of the greatest challenges our civilization has ever faced,” concludes Jonathan Foley, the director of the Institute on the Environment (IonE) at the University of Minnesota , in 2009 essay for Scientific American.

That time will most likely come around 2050 if current projections are true, when the world’s human population is set to reach the nine billion mark. Why a challenge? Because the world is already underfed as it is; rising biofuel use puts strain on food crops to be converted to feed-stock crops, while at the same time causing deforestation; the ever rising middle class in China and India, two countries that house more than a third of the world’s population, that has pumped up considerably meat consumption, and lastly, but not least, climate change  which is expected to get worse and hamper food production.

A solution? Grow more food, of course. Thing is, crop fields are already stretched almost to their limits, and making room would mean making dramatic compromises like deforestation, something far from being a sustainable approach. The real solution lies in improving your money’s worth, so to speak. Namely, farmers need to improve their crop yields so that they may produce more food from the same surface of crop land, and in all good faith this is exactly what they have been striving to do for a long time.

The chart below was presented in a recently published paper in the journal PLOS ONE , authored by Deepak Ray, Nathaniel Mueller, Paul West and Jonathan Foley, which indicates global crop yields evolution since forty years ago and how these are projected to grow in the next forty years, a time when the human population will reach a critical milestone. 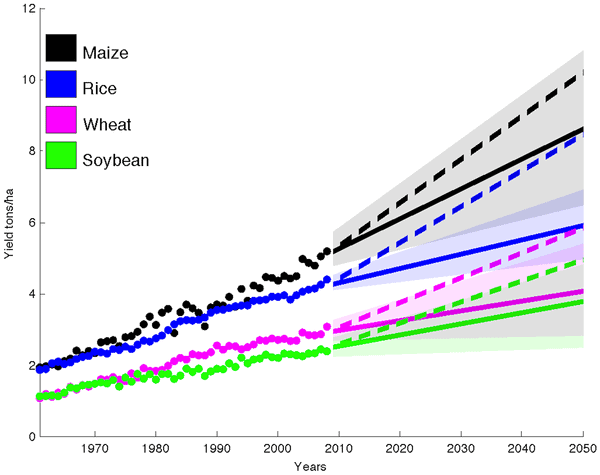 The solid lines in the graph reflect projected crop yields, while the dashed lines show how productivity would need to grow in the future to supply growing demand. Yeah, we’re in trouble! If you check out the graph closely, though, you’ll see that corp yields have truly risen dramatically. In nearly 50 years, farmers have managed to double their crop yields, mostly due to the advent of  synthetic fertilizer and modern agricultural techniques. It’s not enough, apparently.

Yield growth needs to be accelerated if the the projected demand for food, nearly double that of today, is to be satisfied. The authors note that a serious obstacle in achieving this goal is nonuniform productivity growth. In the U.S. Midwest, wheat yields per acre have been rising at a decent 2 percent per year. But in parts of India or Eastern Europe, they’ve basically flat-lined. The same holds true for other crops: “China, India and Indonesia are witnessing rice yield increases of only 0.7%, 1.0%, and 0.4% improvement per year,” the paper notes.

Lack of investment in agriculture and poor enforcement of policies are just a few reasons why this stagnation in growth is happening right now in many parts of the world. Even so, there’s only so much you can squeeze out of your crops. Like I said earlier, it’s simply amazing how farmers have managed to double their yields in 50 years. Genetically modified crops might push the barrier even further, but really how much strain can these crops sustain?

“We can sometimes bust through these walls with technology, genetics, better seeds,” Foley says  “But at a certain point,” Foley says, “we run up against fundamental physiological limits for plants. If billion of years of evolution can’t figure it out, are we going to be able to? That I don’t know.”

Ok, so what are we left with? Foley thinks we need to address these issues if we’re to successfully tackle 2050 and the incoming global food crisis.