It’s glorious and depressing at the same time: NASA used its official Facebook account to shut down one user who was misrepresenting climate science:

It’s climate change denial 101: you take some random fact, gobble it up without even thinking about it, add in some buzzwords to make it look more scientific and spit it out as loud as possible. But this guy went a bit further: he went for the old “NASA said this” – which of course, is simply not true. Not only did NASA never assert that fossil fuels are cooling the atmosphere, but they very much in agreement with the rest of the scientists (read: everybody) who understand that climate change is driven by humans.

But don’t take my word for it, check out just a few articles published on the NASA website:

They’ve made it abundantly clear several times, yet people still misrepresent them and spread false information. I’m glad someone at NASA wrote such a firm reply, but I’m quite sad they had to do it. I wish people would understand the reality of man-made climate change, even though it’s difficult to swallow.

NASA then went on in the comment section to put in place another user who claimed that the space organization “fudges numbers:” 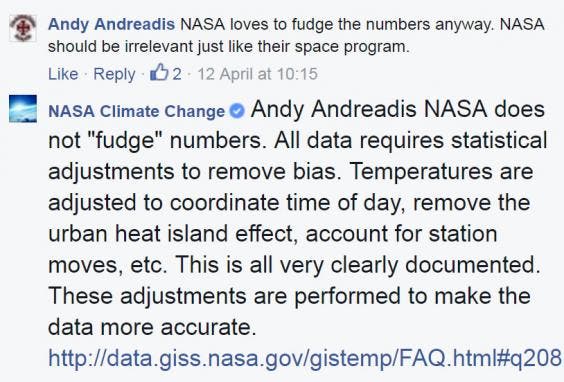 For the sake of clarification, these views likely stem from a previous study which found that some aerosols released by burning fossil fuels can temporarily cool localized areas by reflecting more radiation. The overall effect though is still overwhelmingly warming.