Billions of years ago, Mars had a much richer atmosphere than it has today, which is rather an understatement considering how thin it is. Some scientists hypothesize that once Mars was capable of holding liquid water at its surface, with recent evidence adding weight to these claims. Recent measurements made by Curiosity‘s instruments highlight a massive discrepancies between two isotopes found in the Martian air, showing just how severe the atmosphere thinning was. 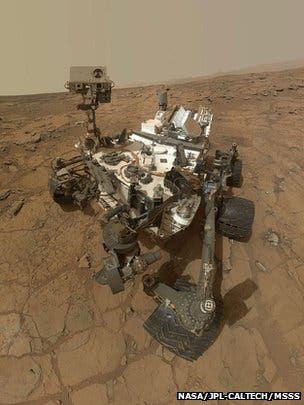 Using the Sample Analysis at Mars (SAM) instrument, previously used to analyze soil samples on the planet, scientists instructed Curiosity to sample gas molecules in the air. What they were particularly interested in is measuring the isotope levels of argon since the element is unreactive. What they found is that the heavier isotope, argon-38, has built up significantly with respect to its lighter counterpart, argon-36. Again, since the element is unreactive, the researchers can only conclude that the lighter isotope was lost to space.

“We’ve been waiting for this result for a long time,” said Prof Sushil Atreya from the University of Michigan, Ann Arbor, US.

“Argon is chemically inert. It does not interact with the surface; it does not exchange with the interior [of the planet]. So it’s the cleanest, clearest signal of escape,” he continued.

To reach these conclusions, the Curiosity team had to make use a new procedure for the first time, as they amplified the argon in its sample chambers by removing other, more dominant gases. This is because argon makes up only a small fraction of the modern Martian atmosphere, amounting to  just 5.3 parts per million. The test showed there are 4.2 atoms of argon-36 for every one of argon-38. For comparison, the ratio is 5.5 to one in the atmospheres of the Sun and Jupiter.

Because it has no magnetic field, like the one protecting Earth’s atmosphere, Mars’ atmosphere is completely exposed to the perils of solar wind which easily strips lighter gas molecules from the atmosphere’s uppermost layers. Some estimates have today’s atmosphere 95% thinner than billions of years ago, which has prompted some to believe it was capable of sustaining liquid water on its surface. Because of the extreme low pressure today, liquid water would simply instantly boil.

Despite some are skeptical of such a theory, the most recent major debriefing from Curiosity offered tantalizing evidence that Mars once hosted flowing bodies of water formed under stable conditions as attested by mudstones whose textures  indicate stratification.