At a high-level signing ceremony in New York, more than 170 countries signed up to the landmark COP21 climate changed deal first adopted last December in Paris. Many media outlets praised the signing event, where 60 heads of state were in attendance as well as celebrities, like Leonardo DiCaprio. It is indeed a great achievement in fighting climate change on a global level, but only a small step in many yet to come.

At a high-level signing ceremony in New York, more than 170 countries signed up to the landmark COP21 climate change deal first adopted last December in Paris. Many media outlets praised the signing event, where 60 heads of state were in attendance as were celebrities such as Leonardo DiCaprio. It is indeed a great achievement in fighting climate change on a global level, but only a small step in many yet to come.

Climate change negotiations have been going on for more than twenty years, but it was only at last year’s 21st edition of the United Nations Climate Change Conference that both rich and poor countries agreed to limit greenhouse gas emissions, part of an internationally binding pact. In Paris, 189 countries representing 98% of the world’s emissions were listed in the agreement, each pledging to reduce or cap emissions based on their historical responsibility. Each country proposed the amount of CO2 it would reduce as written in documents called Intended Nationally Determined Contributions or INDCs. This way, delegates from each country came with a plan from home that it was ready to accept, with only some fine tweaks made in Le Bourget, France.

Previously, other UN climate change conferences failed because negotiations followed a top-down approach, instead of bottom-up, and some players were always unsatisfied with the terms and conditions. This brilliant negotiating framework was one of the key features that made the event so successful.

For the COP21 deal to become legally binding, it needs to be ratified by each country’s government which can be complicated and takes time. It was only “adopted” in Paris, and “signed” in New York last Friday.  To come into force, the pact needs to be ratified by at least 5f countries that collectively sum at least 55% of the world’s carbon emissions. This is where it gets complicated because it differs on a case by case basis. In the United States, the agreement can be ratified by executive action, namely the President without consent from Congress, which is opposed to the historical pact. The current Democrat leading nominee, Hilary Clinton, is in favor of continuing President Obama’s legacy, whose leadership was essential to making COP21 successful. The leading republican nominee, Donald Trump, is a climate change denier and is woefully opposed to the deal. In Mexico and India, however, the consent of the Parliament is required. When a country fulfills its necessary domestic processes, it will come back and deposit an “instrument of ratification, acceptance or approval.”  Once all these conditions are met, only then will the agreement come into force. This could happen as early as 2017 or as late as 2020. 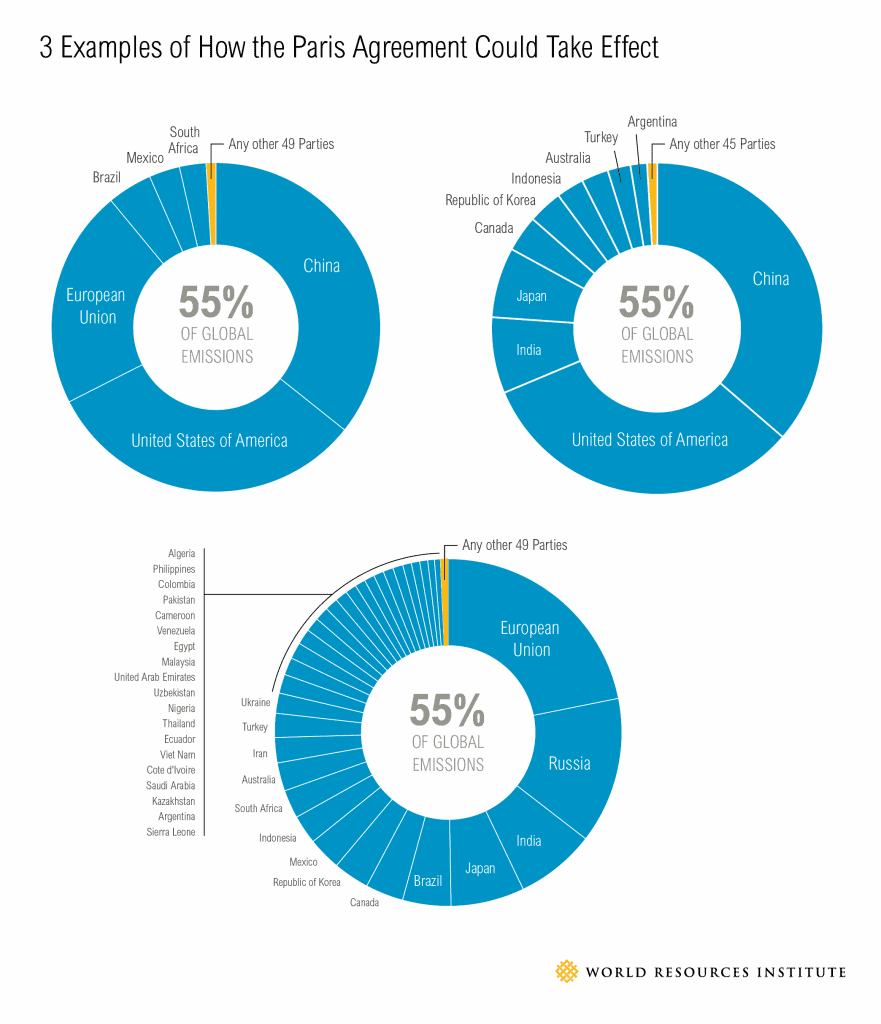 To keep this short, it’s a long and complicated process with many steps ahead before the agreement can come into force.

Another reason why we shouldn’t feel too good about ourselves, despite the good news from New York, has to do with the INDCs. As they stand now, the planned emission cuts like China capping emission by 2030 and the U.S. cutting 26% to 28% below 2005 levels by 2025, are not enough to meet the convention’s stated goal of keeping warming at 1.5 degrees Celsius past the industrial age average. Right now, this would only limit warming to about 3 degrees Celsius.

Every five years, once the agreement comes into force, each country is expected to submit a revised, more ambitious INDC. There are no guarantees that progress will be made at the pace the world needs and expects, though. Still, if there’s a will, there are many places where governments can make significant progress. Specifically, if two key issues are addressed, the returns would be fantastic:

It would be naive to think that such an ambitious goal can be achieved by state action alone. Each of us needs to play our part. Consume responsibility and press your representatives for more urgent action. If you have stocks in fossil fuels, divest. Thankfully, there’s a massive potential for change in the private sector too. As the price of solar is constantly being slashed year in year out, the market will soon move to a massive adoption of solar energy simply because it makes economic sense. If fossil subsidies were cut, this paradigm shift would become accelerated.

The coming decade will prove to be crucial. It will prove whether or not the world is capable of uniting to address the greatest threat life on Earth is currently facing.