Almost $3.4 trillion divested away from fossil fuel, $800 bn. more than in September

More than 500 institutions representing over $3.4 trillion chose to divest away from fossil fuels, $800 million of which only in the past 10 weeks.

by Tibi Puiu
in Climate, News
Reading Time: 6 mins read
A A
Share on FacebookShare on TwitterSubmit to Reddit 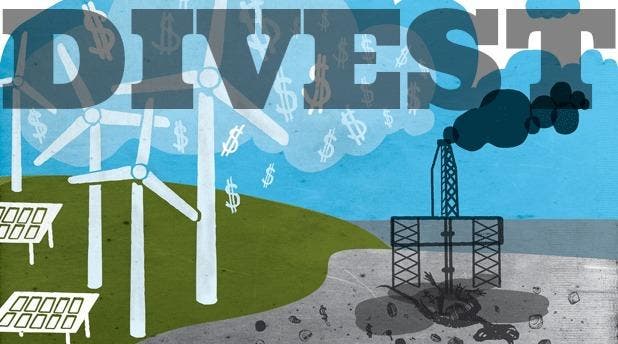 If we’re to avert potentially catastrophic global warming past the 2 degrees Celsius threshold set by the IPCC and adopted by the UN COP21 meeting, efforts on all fronts are required. This means massive advances in research and development, continued and sustained deployment of new renewable energy especially in developing nations and phasing out subsidies. Meanwhile, important actors on the financial market stage need to be aware where their money is being funnel and what it’s used for. Many corporations, universities, churches, municipalities, private individuals and so on have money invested in the fossil fuel industry worth trillions of dollars. Thus, divesting from fossil fuels is a parallel effort, but maybe equally important, that helps, firstly, level the field and, secondly, trigger the irreversible transition to renewable energy away from fossil fuel.

Since it was introduced in 2011 by the  350.org group the divestment movement has come a long way. It aims to convince authorities and private entities alike to cut oil, gas and coal funds. It first began in US universities, but it has since spread to New Zealand, Australia, Europe and the rest of the world. Cities, towns, universities, religious entities and even the heirs to the Rockefeller fortune pledged their support and vowed to divest fossil fuel. “Almost from the start, academics have called it the fastest growing such anti-corporate campaign in history, and it’s clearly accelerating by the day,” said Bill McKibben, one of the founders of the 350.org.

Initially, divestment was meant to raise awareness on climate change. In time, the movement has grown at such a rate that the idea of actually making a serious dent to the fossil fuel industry is not such a crazy idea anymore. In September, Arabella Advisors reported $2.6 trillion in assets have moved away from fossil portfolios or 50 times more than last year. Of course, current circumstances are favorable. Oil prices are at their lowest in six years, and the coal industry is getting buried. But that’s not enough to explain the explosive rate of growth in divestment. Since September, an additional $800 billion worth of assets have been divested away from fossil fuels, jumping the total amount to $3.4 trillion, 350.org and Divest-Invest report.

“A growing number of investers do not want to be associated with this industry. It demonstrates that investors are really commited to preventing climate change. The French Parliamnet has commited to divestment, also Munster, Melbourne and huge institutions such as the London School of Economics. We’re seeing a surge of commitments; it’s really exciting!” Boeve added.

But what will happen if coal and oil markets rebound in the coming years? Will some of these institutions decide to revert their investments for the sake of dividends? Jamie Henn, a 350.org co-founder says this is unlikely.

“As long as the fossil fuel industry’s business model relies on wrecking the climate, there will always be a moral reason to divest. We’re confident that in the years ahead, the economic case for divestment will only get stronger. The only way coal could survive would be with wildly expensive, and yet unproven, carbon capture and sequestration. If the price of oil goes up, there will likely be new restrictions in place, like carbon prices, that will also drive up the cost of production. The plunging cost of renewables will further disrupt the market. No matter how you slice it, it makes sense to divest now,” Henn told ZME Science.

Carbon Tracker reports that 60 to 80% percent of current known fossil fuel reserves need to stay in the ground if we’re to avert 2 degrees C of warming. In light of this and the recent developments I’ve witnessed here at COP21, it’s increasingly clear that investing in fossil fuels is becoming less and less wise. “There is a moral imperative to save thet planet and to do so we need to end the fossil fuel industry now. It also makes economic sense,” said Stephen Heintz from the Rockefeller fund, a fund with assets of $3.1 billion, also on the Divestment panel press conference at COP21.

In total some 500 institutions have pledged and committed one way or the other to divest. The latest to join are:

This is the latest major great news in a slew since COP21 kicked off on Monday in Paris. Previously, Bill Gates announced the biggest private climate fund in history, India revealed plans for the International Solar Alliance which will see 1,000 billion invested into accessing the solar potential of developing countries, and last but not least an unprecedented call to end fossil fuel subsidies.

Divestment has grown tremendously, and we can only rejoice. It’s up to all of us now to sustain this momentum and help divestment gather even more steam.

“COP21 has certainly acted as as magnet to attract new commitments. I think the momentum for divestment will continue even without a major climate summit on the horizon. But it will be greatly helped if the Paris climate agreement includes a clear commitment to get off fossil fuels and make a just transition to 100% renewable energy. That’s the signal that would unlock even more divestment commitments,” Henn wrote in an e-mail for ZME Science.