Carbon dioxide levels throughout the northern hemisphere hit 400 parts per million (ppm) for the first time in human history in April – the ominous threshold has been reached, and it continues to go up.

Time is running out 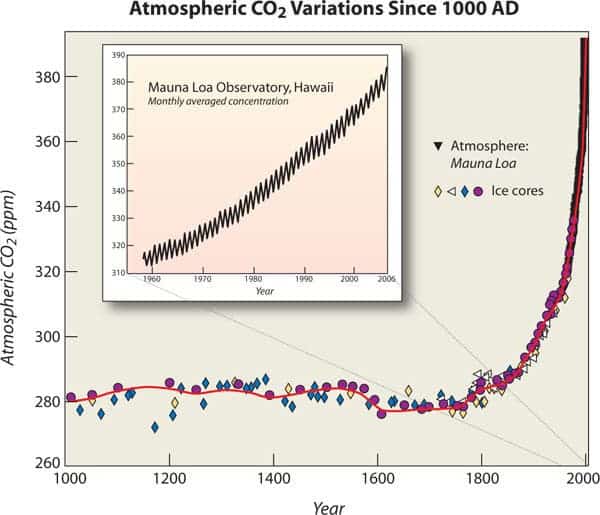 I’m sad that I was right when I wrote: The Inevitable 2014 Headline: ‘Global CO2 Level Reaches 400 PPM For First Time In Human Existence.’

It seemed unthinkable 50 years ago, but it slowly began clear that we were going to reach it. It’s clearly a bad omen: 400 ppm has long been regarded as the point after which negative effects really start to happen – and we’re seeing that already. Droughts, decreasing water supplies, hurricanes, even climate refugees, we’re seeing all that now, and it’s just the tip of the iceberg.

According to the World Meteorological Organization, the 400 ppm level was first reached in the Arctic areas, and is rapidly spreading southwards. Rising concentrations of the heat-trapping gas raise risks of more heatwaves, droughts and rising sea levels.

“Time is running out,” WMO Secretary-General Michel Jarraud said in a statement. “This should serve as yet another wake-up call about the constantly rising levels of greenhouse gases which are driving climate change. If we are to preserve our planet for future generations, we need urgent action to curb new emissions of these heat-trapping gases.”

A real wake up call?

Almost 200 governments have agreed to work out a deal by the end of 2015 to cut down climate change – but that’s hardly satisfying – considering the failure of the Kyoto Protocol. Well, maybe failure is too strong of a word here – perhaps a failure of the US and Canadian governments is a better way of putting it (the US has refused to sign the protocol, and Canada has backed out of it). The deal here would be a way to limit the average temperature increase to two degrees Celsius (3.6 degrees Fahrenheit) above pre-industrial times. So far, temperatures have risen by 0.8 degrees Celsius (1.4 Fahrenheit).

In April, the U.N.’s panel of climate experts said that greenhouse gas concentrations, led by carbon dioxide, would have to be kept below 450 ppm to give a good chance of achieving the 2C goal.

Carbon dioxide is mostly emitted by the burning of fossil fuels, and it stays in the atmosphere for centuries. During the last 800,000 years, the level of atmospheric carbon dioxide fluctuated between 180 ppm and 280 ppm, and it’s not clear exactly when was the last time it went over 400. With the acceleration of the industrial revolution, carbon levels grew to 290 ppm by the end of the 19th century, and at the turn of the past century, in 2000, levels hit 370 ppm. The overwhelming scientific consensus is that humans are causing this rise