The inevitable 2012 title was ‘Human population reaches 7 billion‘, surpassing anything anyone could have imagined 100 years ago. Now, we’re approaching a very worrying milestone – CO2 levels in the air will reach 400 ppm (parts per million), for the first time in human existence. 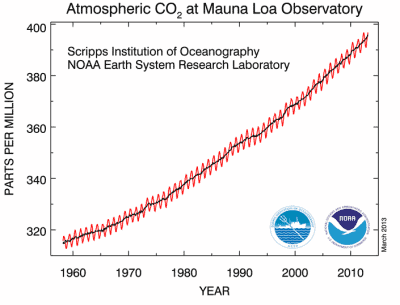 CO2 levels have risen at a quick, steady pace for several decades, as the chart above clearly shows. Now, just to get this out of the way, any man in his right mind will tell you this is man made, there’s no argument there. There is a direct connection between global CO2 levels and human activity, as was clearly observed by studies conducted on ice cores.

But hey, guess what. Geologists and paleoclimatologists don’t even look at thousands of years – that doesn’t even make any sense for us. Here, take a look at the CO2 levels from the past 800.000 years. 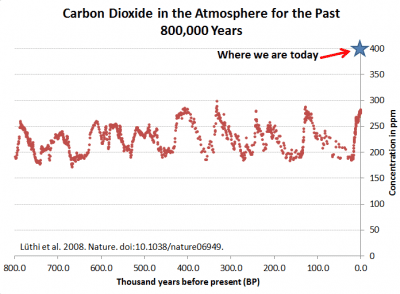 As a matter of fact, in 2009, a research team from UCLA published a paper in Science concluded that we have to go back in time some 15 million years before we reach CO2 levels like those we have today; and that change happened in geologic time (hundreds of thousands/millions of years), slowly. The change we have today happened in about 100 years, so you can easily understand the differences.

So what does this mean? First of all, CO2 is a greenhouse gas, which in time causes global warming. Quite simply put, the more CO2 you have in the atmosphere, the hotter our planet gets. Considering how the CO2 level trend shows no intention of even slowing down, neither will global warming; on the contrary, IPCC models show the atmospheric concentration of CO2 could range between 541 and 970 ppm – an increase of 90–250% above the concentration in the year 1750. So rememeber this post until next year – we’ll be sure to remind you when we reach CO2 400 ppm.