by Mihai Andrei
in Environmental Issues, Oceanography
A A 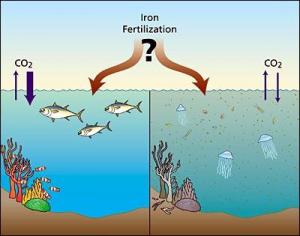 Global warming is a hot topic everywhere in the world, and probably have ourselves to blame for that. The careless use of resources combined with greed and lack of respect for mother earth could be what leads to our demise. The signs are everywhere but at first they were more obvious in the oceans. So probably protecting and helping out the oceans should be among the first places to start the long and hard fight against global warming. In the late 1980s after oceanographer John Martin famously told colleagues: “Give me half a tanker of iron and I’ll give you the next ice age.” scientists started to take a serious look at that. Huge blooms of marine plants (phytoplankton) could be caused by spreading slurries of dissolved iron into the oceans. Phytoplankton consume carbon dioxide as they grow and iron is a necessary micronutrient.

A senior scientist in WHOI’s Marine Chemistry and Geochemistry Department stated that there are many critical questions that require both better scientific understanding and an improved legal, economic, and political framework before iron fertilization could be effective. So the days September 26-27 are going to be the days that scientists at the Woods Hole Oceanographic Institution (WHOI) will host an international, interdisciplinary conference on the proposed “iron fertilization” of the ocean. This is the first step in making iron fertilization happen. In 20 hours of formal presentations and panel discussions over two days, participants will discuss:
Efficacy: Can iron fertilization work?
Research: What do we already know, and what could future studies, models, and experiments tell us?
Consequence: What will be the intended and unintended impacts?
Policy: What are the economic, social, and regulatory considerations?

It has been tested but results have varied to a certain extent. They have not varied greatly and in general, iron fertilizers have been shown to promote plant growth in surface waters. But the impacts from long-term, large-scale fertilization are hard to predict. It is also not certain whether the process removes carbon dioxide from the atmosphere for the long term or just for a fleeting time. Still it remains a plan to study and probably it is going to be used to help mankind in such troubled times.