So much for reasoned debate and scientific discussions: a controversial group bent on discrediting climate science revealed several billboards that compared people interested in climate change with terrorists. 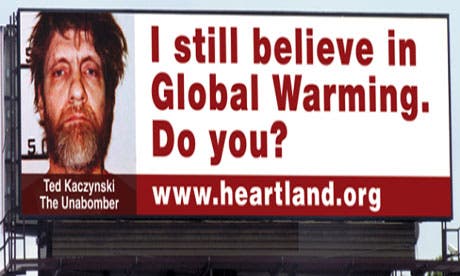 The Heartland Institute, a Chicago based group posted these billboards which displayed Ted Kaczynski, a terrorist whose bombing campaign lasted almost 20 years, killing three people and injuring 23 others. As if these ‘advertisements’ weren’t enough, they came out with an insulting statement as well:

“The most prominent advocates of global warming aren’t scientists,” Heartland’s president, Joseph Bast, said in a news release. “They are Charles Manson, a mass murderer; Fidel Castro, a tyrant; and Ted Kaczynski, the Unabomber.” He said other “global warming alarmists” include Osama bin Laden and James J. Lee, who took hostages inside the headquarters of the Discovery Channel in 2010.

After virulent criticism from virtually everybody and several legal threats, the Heartland Institute withdrew the billboards, but still didn’t apologize for them, and instead, claimed this ‘experiment’ fulfilled its purpose.

“This provocative billboard was always intended to be an experiment. And after just 24 hours the results are in: It got people’s attention,” he said, adding: “This billboard was deliberately provocative, an attempt to turn the tables on the climate alarmists by using their own tactics but with the opposite message. We found it interesting that the ad seemed to evoke reactions more passionate than when leading alarmists compare climate realists to Nazis or declare they are imposing on our children a mass death sentence…”

In their original press release, they claimed there was very little difference between people advocating climate science and madmen. While some scientists raise questions about the extent and cause of climate change, almost all the world’s leading climatologists agree that global temperatures are rising because of greenhouse gas emissions from the burning of fossil fuels. But even though some people choose to ignore this, it’s their right to do so – but doing it in such a way is just unacceptable to say the least. I honestly believe this is the kind of plague drawing humanity back, but then again, I may be just as mad as climate scientists. Where do you stand ?