Researchers look at hibertnating bears for the first time 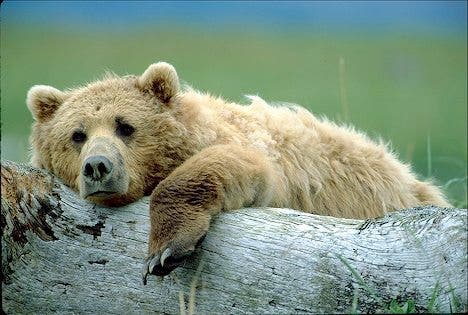 Bears are some of the most amazing and loved animals out there, and to find out that up until a few months ago nobody made a thorough study about their hibernating was really sad for me. Until this, almost everything we knew about hibernating was that… well, bears do it’; they go into their dens and come out a few months after that looking a whole lot skinnier, and of course, hungrier.

But researchers from the University of Alaska at Fairbanks and Stanford University weren’t satisfied with just that, so they set on a quest to find out the details of this long winter sleep that bears do; in order to understand it, they studied five bears that had been caught by local authorities wandering too close to civiliziation. It was really important and hard to find such specimens, because when in captivity, their natural cycles get all mixed up, so studying them shows little scientific information, and as for wild ones… you never should wake a sleeping bear – even if you work at Stanford.

These five bears were kept in specially designed dens that had infrared cameras, and they “showed” researchers that during hibernation, the bears’ metabolic level drops to 25%, even though their body temperature goes down way less. During the theoretical 5 months of hibernating, they do not eat, drink or defecate – all they need is air. What good could this do for humans ?

‘If you could reduce the metabolic demand of people, it’ll be favourable either during surgery or as a quick response during heart attack or stroke or trauma,’ Barnes said. ‘What that would do is give you more time. We like to say it would potentially expand the ‘golden hour’ – during which, if you reach advanced medical care, outcomes are better – to a golden day or a golden week.’

It does show great promise indeed, but researchers have yet to figure out how do bears lower their metabolism to such drastic rates. Another more interesting, but even more speculative use for this research would be long distance space travel, because with our current means and what we have in sight, even traveling to Mars will take a really long time.