Scientists and broadcasters announced for the first time that they have captured footage of the extremely elusive giant squid in its own habitat. 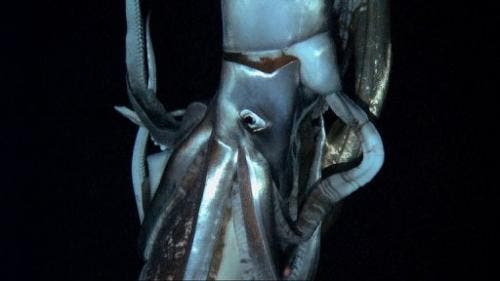 Japan’s National Science Museum succeeded in filming the deep-sea creature at a depth of more than half a kilometer, but so far, the footage hasn’t been made public. In order to accomplish this remarkable feat, they teamed up with apanese public broadcaster NHK and the US Discovery Channel – who surprisingly enough, aren’t working only on gold diggers, crabs and timbermen.

The massive creature is the stuff legends are made of! 8 meters they can, 8 tentacles they have, and many mythological names; but the most memorable – the kraken. Sadly however, researchers see them most of the time when they wash up, usually after big storms. It took 100 missions and over 400 hours spent in a submarine. Museum researcher Tsunemi Kubodera said they followed one creature to 900 metres as it swam into the ocean abyss.

“It was shining and so beautiful,” Kubodera declared. “I was so thrilled when I saw it first hand, but I was confident we would because we rigorously researched the areas we might find it, based on past data.”

Indeed, it takes a lot of effort and thoroughness to film it, as previous unsuccessful attempts showed.

“Researchers around the world have tried to film giant squid in their natural habitats, but all attempts were in vain before,” Kubodera said. “With this footage we hope to discover more about the life of the species,” he said, adding that he planned to publish his findings soon. 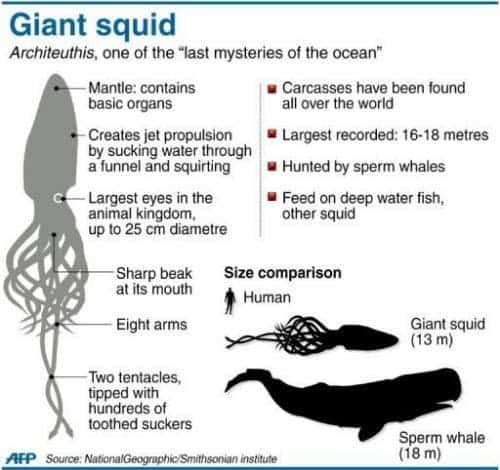 Due to this elusiveness, there is little science has been able to do so far to shed light on this myth, and some people even call the giant squid “the last remaining legend”. According to researchers, speciments can grow even beyond 10 meters, as you can see from the illustration above.