All giant squids are just one species

by Mihai Andrei
in Animals, Genetics
Reading Time: 3 mins read
A A
Share on FacebookShare on TwitterSubmit to Reddit

The fearsome monster that inspired Greek and Norse mythology was once driven almost to extinction, facing a genetic bottleneck event that marked their evolution as a species. 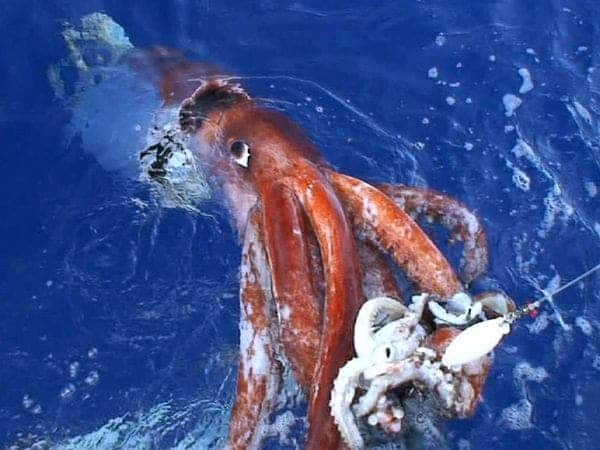 The finding comes from an analysis of tissue samples from 43 giant squid (Architeuthis spp.) from around the world. The analysis were mostly concluded on specimens which were washed up onshore or accidentally caught by deep water trawlers. Here’s the story around this study:

Some 15 years ago, on an impulse, biologist Thomas Gilbert walked into a store in Cambridge and picked up a book on giant squid, creatures he knew almost nothing about. He took the book, carefully placed it in his library, and then… forgot about it for a few years. It took a few years, when he was sick in bed, that he finally decided to pick the book up; what he found out, was that the rest of the world knew remarkably little about them as well.

In that particular moment, Gilbert, who spends most of his time studying ancient DNA at the Centre for GeoGenetics at the Natural History Museum of Denmark in Copenhagen and the evolution of birds, decided to enlarge our knowledge on these remarkable creatures – and so he did.

Gilbert and colleagues from all over the world have analyzed the genetics of giant squid for the first time. The data “corroborates what has been said earlier using morphological criteria,” says Steve O’Shea, one of the world’s leading authorities in terms of Architeuthis; these results show that globally, we are only talking about one species, globally distributed. But the results also deepened the mystery of giant squids.

These creatures, when fully grown, measure somewhere between 10-12 m (though even larger specimens have been observed), and have been reported in stories and legends all across the world, but here’s the kicker: no giant squid was photographed before 2002.

Researchers looked closely at the mitochondrial DNA of the creatures, and pretty quickly, they noticed something remarkable: regardless of where the squids come from (Japan, California, mid Atlantic, etc), they were genetically very similar. The giant squid has no diversity! As a matter of fact, In fact, the diversity of Architeuthis is lower than that for any other marine animal, except one — the basking shark Cetorhinus maximus, whose population is thought to have rebound from a very reduced number of specimens.

“When we found that the global genetic diversity of the giant squid was this low, we figured we had made an error.” But then the team checked their numbers again and saw that they were correct.

So this discovery doesn’t only show that there is in fact just one species, but also that the species went through a bottleneck event, one that almost wiped all of them.

“It is really damned hard to say” what is responsible for the population crash, says Gilbert. “I just can’t conceive of predation being responsible. If anything, I’d put my money on changes in ocean conditions somehow altering the nutrient-rich deep waters that these animals need.”