NASA to conduct unprecedented twin experiment: one twin will spend a year circling the Earth, while the other stays grounded

It’s something that puzzled me for years now: consider a pair of identical twins; say, one gets a job as an astronaut and rockets into space. The other is also an astronaut, but he decides to skip this one and stay home. After a while, they reunite, but are they still identical? That’s exactly what NASA wants to find out! 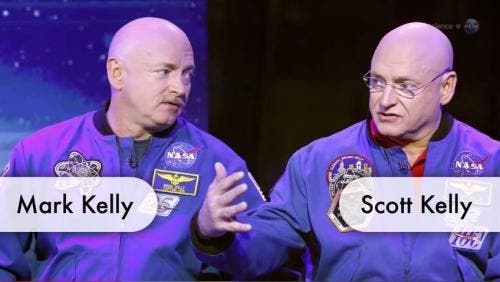 In March of 2015, NASA astronaut Scott Kelly will join cosmonaut Mikhail Kornienko on a one-year mission to the International Space Station. Their lengthy mission is part of a study which will document the effects of long-term space flight on the human body. But here’s the cool part: Scott Kelly also has a twin brother, Mark Kelly – who is also an astronaut, albeit retired. We wrote about his retirement here. While Scott, the test subject, spends one year circling Earth onboard the ISS, his brother Mark will remain home as a control.

“We will be taking samples and making measurements of the twins before, during, and after the one-year mission,” says Craig Kundrot of NASA’s Human Research Program at the Johnson Space Center. “For the first time, we’ll be able two individuals who are genetically identical.”

So what will they be studying? The ISS doesn’t go at high enough speed for an age difference to be noticeable (according to Einstein’s theory, if you travel at fast enough speeds, comparable to that of speed of light, time will slow down for you – so if this were to happen, one twin would be younger than the other). The main focus will be the subjects’ health.

“We already know that the human immune system changes in space. It’s not as strong as it is on the ground,” explains Kundrot. “In one of the experiments, Mark and Scott will be given identical flu vaccines, and we will study how their immune systems react.”

Another experiment will look at telomeres—little molecular “caps” on the ends of human DNA. Telomeres have been linked to aging, and in space, telomere loss could be accelerated by the action of cosmic rays. Researchers will study if space travel accelerates aging. Meanwhile in the gut, says Kundrot:

“There is a whole microbiome essential to human digestion. One of the experiments will study what space travel does to [inner bacteria] which, by the way, outnumber human cells by 10-to-1.”

Another study will focus on how vision changes in outer space, and on “space fog”—a lack of alertness and slowing of mental gears reported by some astronauts in orbit. But these aren’t separate studies – it’s just a big one with many aspects.

“These will not be 10 individual studies,” says Kundrot. “The real power comes in combining them to form an integrated picture of all levels from biomolecular to psychological. We’ll be studying the entire astronaut.”