The Blue Marble: the most stunning, high-res photo of the Earth

A while ago NASA launched its next generation weather satellite, the Suomi NPP satellite, into low-orbit, on a mission to  collect critical data set to improve short-term weather forecasts and increase understanding of long-term climate change. Besides, valuable scientific measurements, the NPP satellite also provides some incredible glimpses of our planet in great detail. We showed you one of the first pictures captured by the satellite late last year, a gorgeous view by all meas, but only an appetizer compared to this latest rendition of the great blue planet. 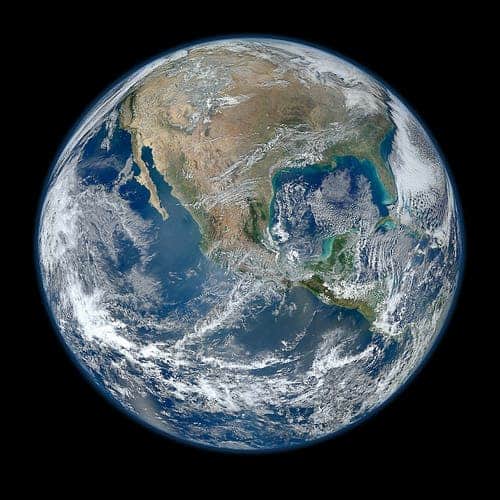 The 64-megapixel image was captured by the VIIRS instrument aboard NASA’s National Polar-orbiting Operational Environmental Satellite System Preparatory Project (or NPP) satellite. Just recently the NPP was renamed Suomi National Polar-orbiting Partnership, or Suomi NPP, in honor of the late Verner E. Suomi, recognized as the father of satellite meteorology.

The blue marble photo is actually a composition of several superimposed images, each taken from separate swaths of the Earth’s surface from January 4, 2012. The Suomi NPP now orbits Earth about 14 times each day and observes nearly the entire surface.

Check out the 8000×8000 and have some fun zooming in through the North American continent, or download smaller versions for your tablet or smartphone.