Turns out, another solar system has more planets than ours

Our solar system is special for two reasons: the first one, obviously – is us. Our solar system is the only one we know of so far that hosts life. The second one is the number of planets – no other solar system that we’ve seen until now had as many planets as ours, but this has just changed.

The decade of exoplanets 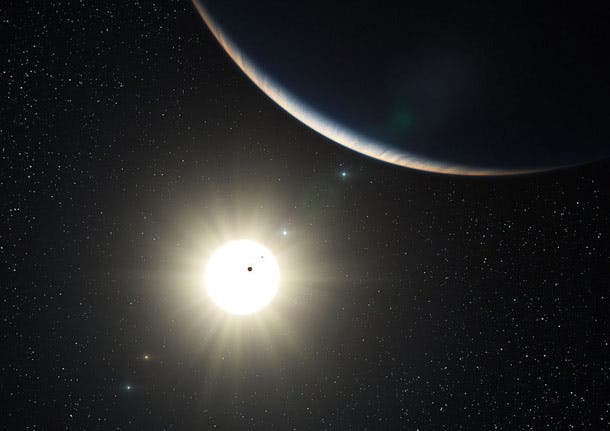 We keep making absolutely stunning exoplanet discoveries, mostly due to the Kepler telescopes, and the decade is just starting! HD 10180, located about 130 light-years away, was already known to have six planets, five roughly Neptune-sized and one the size of Saturn – nothing particularly interesting here, aside for the fact that pound for pound, this already made it a little more crowded than our own solar system.

But a new analysis using the HARPS camera in Chile has turned up a few new planets, enough to give HD 10180 more planets than our own Sun – and the fans of Pluto as a planet are absolutely not going to love this. Guessed it already? HD 10180 has (that’s right) nine planets, breaking the record by only one.

These new planets have masses of 1.3, 1.9, and 5.1 times that of Earth, and orbit the star with periods (think of that as the planets’ years) of 1.2, 10, and 68 days, respectively. The first two out of three seem pretty well placed in the Earth mass range, and they are what astronomers like to call ‘super Earths‘. However, the first one is only 3 million km (less than 2 million miles) from HD 10180, and the second barely any cooler at about 14 million km (8 million miles) – which makes them closer to their sun than Mercury is to our sun, and the two stars are pretty similar.

Of course, it doesn’t look like they’ll win the ‘most likely to host life’ award, but the solar system snatched our prize! If there’s ever a reason to promote Pluto back to planet status, I say be it now and let us tie for the ‘solar system with most planets’.

For a full review of the findings, check out Bad Astronomy’s post.