The Kepler mission: searching for planets in the Goldilocks area 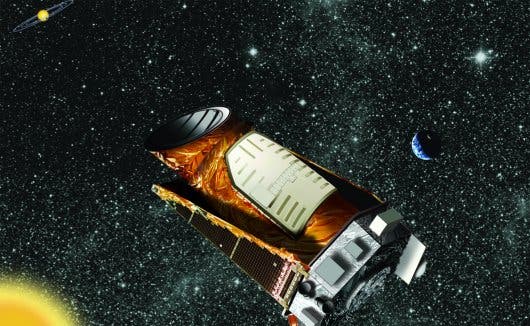 The Goldilocks area is one of the most interesting for astronomers throughout the known Universe, as it has great hope for finding planets similar to our Earth. The Kepler 10b planet is not the most hospitable one you could think of: located some 560 million light years away from our planet, and with a surface temperature hot enough to melt steel, it is however the first one located with the Kepler space telescope, which was launched by NASA with the role of finding habitable planets in the Goldilocks area, not too cold and not too hot; many have nicknamed it Hubble’s smaller brother.

Since the first planet beyond our solar system has been found in 1992, it’s been pretty much of a roll, with the count now being over 500, and the finds will grow a whole lot in the near future, partially thanks to the Kepler telescope; one of the leading astronomers of the project is Geoff Marcy, who helped spot 70 planets out of the first 100 ever to be found.

What sometimes gets lost in the shuffle when a nice result shows up on all of the Web pages and the newspapers around the world — what you don’t realize is to get that result meant that five or 10 people were burning that midnight oil, trimming the errors down to the point that the Earth-size planets are detectable. It’s easy to dismiss the discoveries as, Oh, it’s new computers, or it’s new optics. These things happen because amazing people dream and then put their dreams into perspiration-dripping action.

He also seems very optimistic about the future of Kepler, and for good reason: just this week he managed to find nine planets, and this is just the beginning.

The bad news is that the number of the planets will find will plateau, and not grow exponentially; the good news is that it’s not the numbers we should be looking at increasing, it’s the quality of the findings. We should be looking at planets with an atmosphere, and with a temperature between the freezing and boiling point. The odds of life on Earth may be one in a billion, but there are a lot more than 1 billion planets out there, so if we keep looking, we’re bound to find something.