by Mihai Andrei
in Space, Studies
Reading Time: 3 mins read
A A
Share on FacebookShare on TwitterSubmit to Reddit 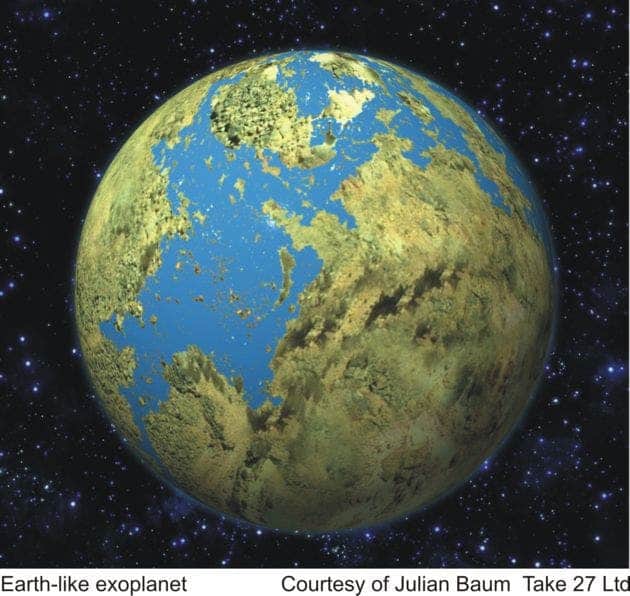 A recently discovered planet is just about the right size and is in the right place to host life; as a matter of fact, astronomers seem quite sure it hosts life, and we’re talking more than microbes. Still, current technology doesn’t allow scientists to search for chemical markers of life.

About 20 light years away, it revolves around a red dwarf, and has been nicknamed Gliese 581g – the “g” stands for Goldilocks.

“Personally, given the ubiquity and propensity of life to flourish wherever it can, I would say that the chances for life on this planet are 100 percent. I have almost no doubt about it,” Steven Vogt, professor of astronomy and astrophysics at University of California Santa Cruz, told Discovery News.

The discovery comes as a result of an 11 year program to get as much information as possible with ground-based instruments and telescopes; these instruments work by measuring minute variations caused by gravitational tugs of orbiting planets.

“This is really the first ‘Goldilocks’ planet, the first planet that is roughly the right size and just at the right distance to have liquid water on the surface,” astronomer Paul Butler, with the Carnegie Institution in Washington, D.C., told reporters during a conference call Wednesday.

“Everything we know about life is that it absolutely requires liquid water,” he added. “The planet has to be the right distance from the star so it’s not too hot, not too cold… and then it has to have surface gravity so that it can hold on to a substantial atmosphere and allow the water to pool.”

The planet is roughly three times larger than Earth, so it’s big enough to hold an atmosphere. It’s also quite old, and even more interesting, it’s tidally locked to the Sun, in a similar fashion to the Moon locked to the Earth: the planet’s star always ‘sees’ the same side, which is perpetually warmer and lighted, while the other one is dark and cold. As a result, temperatures are pretty stable, and vary greatly, which also encourages life.

“This planet doesn’t have days and nights. Wherever you are on this planet, the sun is in the same position all the time. You have very stable zones where the ecosystem stays the same temperature… basically forever,” Vogt said. “If life can evolve, it’s going to have billions and billions of years to adapt to the surface.”

“Given the ubiquity of water, it seems probable that this thing actually has liquid water. On the surface of the Earth, everywhere you have liquid water you have life,” Vogt added.

Astronomers seem quite convinced that many more such planets will be discovered in the not so distant future, and we will be entering a new stage in studying Earth-like planets.

“That being said, it is so close and we have found this thing so soon that it suggests we will start finding a lot of these things in the future and eventually we will find systems that do transit. This is a harbinger of things to come.”

The research will be published in the Astrophysical Journal