The European Southern Observatory’s (ESO) Very Large Telescope in Chile is back with yet another stunning gem. This spectacular spiral galaxy has hosted two supernova explosions over the last 30 years, making it particularly interesting. Supernovae are one of the brightest and most energetic events in the Universe. 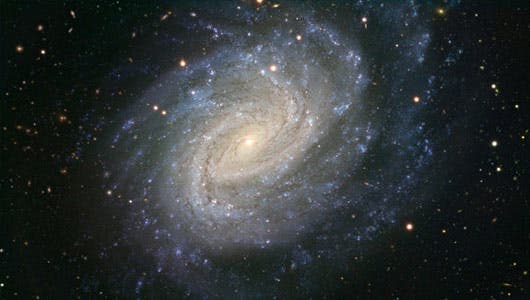 The galaxy’s name is NGC 1187, and is located 60 million light years away from Earth , in the constellation Eridanus. The first supernova found in NGC 1187, officially called SN 1982R, was detected in October 1982 at ESO’s La Silla Observatory in Chile’s Atacama Desert. The second one, called SN 2007Y, was spotted by amateur astronomer Berto Monard in South Africa in 2007.

When a star reaches the end of its life, it dies off in a spectacular fashion, exploding with a high energy release. So you can imagine the magnitude of its energy release, consider that the radiated energy during a supernova explosion is comparable to the amount of energy the sun will emit over the entire course of its life. Also, it’s no rare event for a supernova to outshine whole galaxies before fading away during the course of a few years.

The first supernova from NGC 1187 is no longer visible in this image, however the second from 2007 is still visible near the bottom of the image, albeit fainter since it’s well past its climax point. Nevertheless, the spiral galaxy is stunning itself, with or without supernovae.