Betelgeuse to turn supernova and become second Sun? No, not really

There’s been a whole lot of fuss lately, and you guys have also been writing a lot of emails about Betelgeuse turning supernova. I wrote about Betelgeuse and the odds of it going supernova, as well as the damage it would do a while ago, but there’s no harm in doing it again. 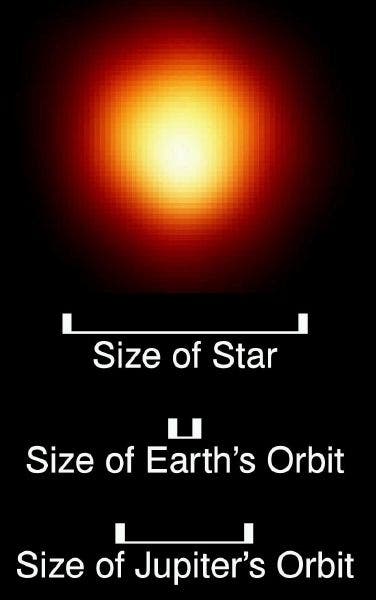 “But what’s all this fuss about the star exploding by 2012? That’s complete garbage,” writes Discovery News’ Ian O’Neill. “There is absolutely no indication that the star will explode in the next year or so. Even the most advanced telescopes and sophisticated computer models cannot predict an exploding star with that precision!”

But even if it went boom tomorrow, what would really happen ? It wouldn’t be the major disaster most of the press has talked about. It would be bright, very bright, but it wouldn’t cook us, and as a matter of fact, it wouldn’t even be hot. Considering the distance, it would be about 1/100,000 as bright as the Sun. Basically, we would be able to see it as another full moon, but nothing more. Betelgeuse does pack a significant stellar power, but it’s 640 light-years away ! So there’s nothing to make you lose any sleep from this point of view.