Supernova observed right after its explosion

by Mihai Andrei
in Astrophysics, Remote sensing
Reading Time: 3 mins read
A A
Share on FacebookShare on TwitterSubmit to Reddit

An unprecedented observation of a supernova right after its explosion has offered scientists extremely valuable insight on these cosmic explosions of biblical proportions. 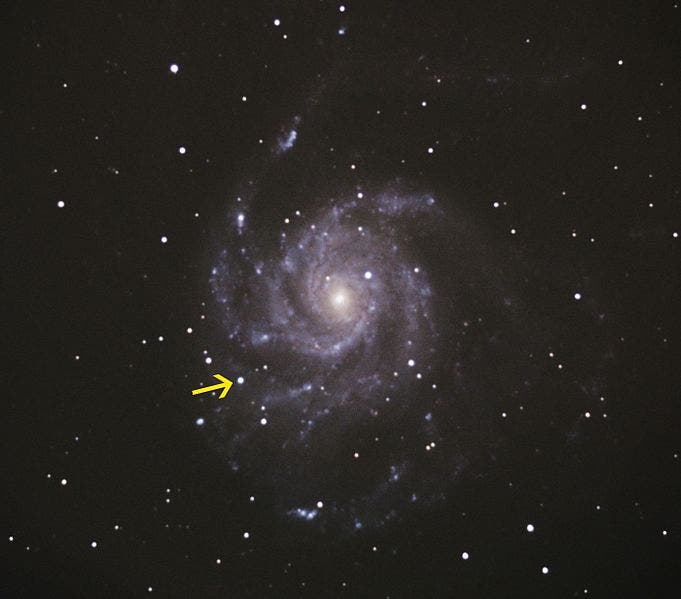 PTF 11kly, a type Ia supernova, was spotted in August in the Pinwheel galaxy and is one of the closest to Earth ever found – but don’t worry just yet – at some 21 million light years away. It is so big it was actually observable with only binoculars in September, and it gave scientists the best chance yet to study this type of phenomena; astrophysicists reached some pretty interesting conclusions.

For the past half century, they’ve been analyzing type Ia supernovae, understanding that they originate from a binary star system – two stars orbiting each other. PTF 11kly originated from a white dwarf, which means that its companion couldn’t possibly have been a red giant, as previously believed. White dwarfs are usually dead forever, but in some cases, when they are part of a binary system, they can literally suck up matter from its companion (kind of nasty on their side); but sometimes, they can get too greedy and can’t stop absorbing matter, so they suck up to much and go supernova, fusing so fast that the burn can’t be stopped. Astrophysicists aren’t yet sure what kind of star the companion was.

“This is the first time through direct imaging of the explosion site, we were able to rule out certain types of stars as the companion to a Type Ia supernova,” says Weidong Li, a research scientist at the University of California, Berkeley. “The second star couldn’t have been a massive red giant.”

“The high-velocity oxygen shows that the oxygen wasn’t evenly distributed when the white dwarf blew up, indicating unusual clumpiness in the way it was dispersed,” says Peter Nugent of Berkeley Lab.

The explosion revealed an impressive amount of expulsion, including some rare radioactive nickel mixed up all the way through the photosphere.

“Understanding how these giant explosions create and mix materials is important because supernovae are where we get most of the elements that make up the Earth and even our own bodies – for instance, these supernovae are a major source of iron in the universe,” says Mark Sullivan of the University of Oxford. “So we are all made of bits of exploding stars.”