by Mihai Andrei
in Astrophysics, Physics

In a never-before seen feat, astronomers using NASA’s Swift X-ray Telescope have observed a spinning neutron star suddenly slowing down, something which can provide valuable clues to understanding these mysterious objects. 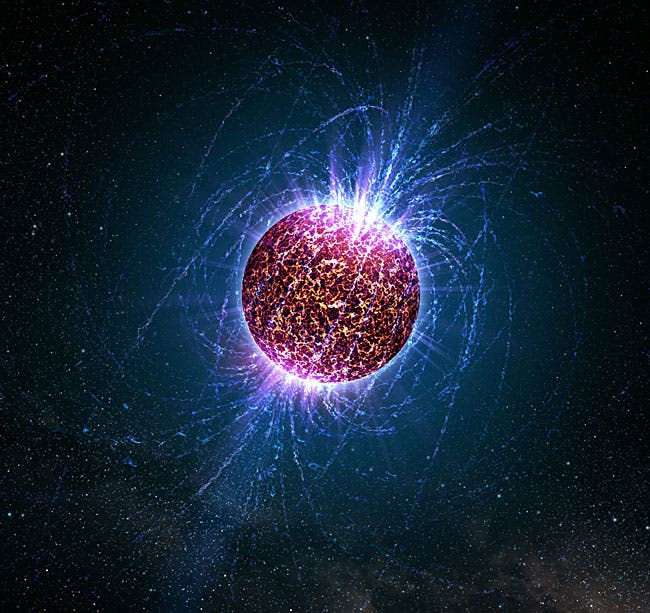 Neutron stars are the cores of former high-mass stars, the remains of supernovae after the blow-up. As the core of the massive star is compressed during a supernova, and collapses into a neutron star, it retains most of its angular momentum. However, since it only has a small fraction of its original mass and radius, a neutron star is formed with very high rotation speed, and then gradually slows down; we’re talking about massive speeds, some neutron stars have been known to have rotation periods from about 1.4 ms to 30 seconds.

They emit a beam of radiation as it spins, and this can make it look like a blinking pulsar to us, which has a very precise period. By analyzing that blink, astrophysicists can analyze how the neutron star is rotating.

However, some neutron stars, like the one in case, have a much stronger magnetic field than most, and they spin slower. 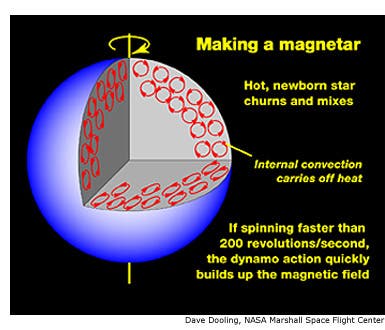 This neutron star, 1E 2259+586, is located about 10,000 light-years away toward the constellation Cassiopeia. It is one of about two dozen observed neutron stars called magnetars. Last year, on April 28, , data showed the spin rate had decreased abruptly, by 2.2 millionths of a second, and the magnetar was spinning down at a faster rate.

The opposite has been observed on several occasions and can be accounted for, but this case is unique so far.

“Astronomers have witnessed hundreds of events, called glitches, associated with sudden increases in the spin of neutron stars, but this sudden spin-down caught us off guard,” said Victoria Kaspi, a professor of physics at McGill University in Montreal. She leads a team that uses Swift to monitor magnetars routinely.

This “anti-glitch” has pretty much baffled astronomers, who are trying to find a valid explanation.

“It affected the magnetar in exactly the opposite manner of every other clearly identified glitch seen in neutron stars.”, said co-author Neil Gehrels, principal investigator of the Swift mission at NASA’s Goddard Space Flight Center in Greenbelt, Md.

This could also have significant implications for understanding the extreme environment of the neutron stars. Since no lab on Earth can simulate them, we have to rely on observations conducted in outer space. A report on the findings appears today,in the May 30 edition of the journal Nature.

This adds yet another mystery to the already long list regarding neutron stars. Current theories suggest that a neutron star has a crust made up of electrons and ions, while the interior is made up of very bizarre… stuff – a neutron superfluid (a state of matter that has 0 viscosity and 0 friction) and a surface that accelerates streams of high-energy particles through the star’s intense magnetic field.

This theory can explain the “glitch”, but not the “anti-glitch” (as far as we can tell so far) – the particles which are ejected from the star drain the energy, but as the crust slows down as a result, the interior (which remember, is frictionless) resists being slowed. The crust fractures under the strain. When this happens, a glitch occurs. There is an X-ray outburst and the star gets a speedup kick from the faster-spinning interior. But for the opposite, there’s no explanation with what we know now.

“What is really remarkable about this event is the combination of the magnetar’s abrupt slowdown, the X-ray outburst, and the fact we now observe the star spinning down at a faster rate than before,” said lead author Robert Archibald, a graduate student at McGill.