by Mihai Andrei
in Physics, Studies
A A 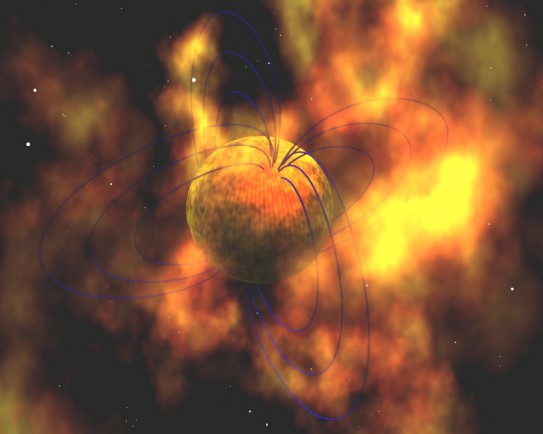 Those bursts are from magnetars. You may have some idea about what a white dwarf is, or a  black hole or even a pulsar, but what are magnetars?

Magnetars are neutron stars with an extremely powerful magnetic field; their decay powers the emission of copious amounts of high-energy electromagnetic radiation, particularly X-rays and gamma-rays. They pack the mass of a sun into a body the size of Manhattan Island – and that’s not the most awesome thing about them. Tiny magnetars have magnetic fields that are at least 100 trillion times as powerful as Earth’s magnetic field.

Their origin is a mistery but this is probably how they are formed: when, in a supernova, a star collapses to a neutron star (it has too much mass to become a white dwarf), its magnetic field increases dramatically in strength.The supernova might lose 10% of its mass in the explosion, or even more. In order for such large stars (10–30 solar masses) not to collapse straight into a black hole, they have to shed a larger proportion of their mass. About 1 in 10 supernova explosions result in a magnetar. In the solid crust of a magnetar, tensions can arise that lead to ‘starquakes’ – astrophysical phenomenons that occur when the crust of a neutron star undergoes a sudden adjustment, analogous to an earthquake on Earth.

Astronomers discovered a magnetar with the NASA’s X-Ray Timing Explorer in July 2003, when it brightened by about 100 times its usual faint luminosity. After that they studied it with the European Photon Imaging Camera, known as EPIC until about March 2006, when the object faded to its pre-outburst brightness. As the magnetar faded, EPIC recorded changes in the energies of the X-rays released.

Then they were able to calculate and describe the physical properties of a magnetar’s surface and magnetic field. The scientists say they are encouraged because the measurement is similar to an earlier estimate made based on how fast the source is “spinning down,” which is the change in the spin period over time. They plan to study more magnetars, using more data from X-ray observatories and they are probably going to find answers to the questions they have.