Watch: How Ants React to a Ringing iPhone

As soon as the phone starts ringing, these ants have a military-like reaction, forming a circle around the device. But why do they do this?

As soon as the phone starts ringing, these ants have a military-like reaction, forming a circle around the device. But why do they do this? The answer is almost certainly ‘due to magnetic fields’. 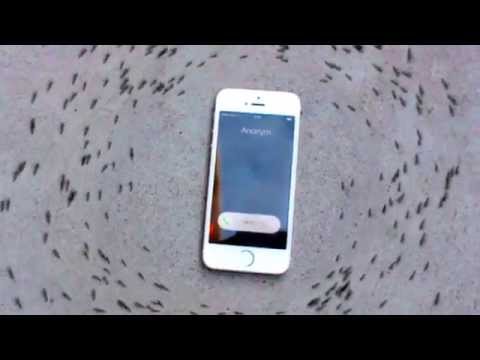 Like many other insects, ants rely on magnetic fields to find their way around – they have internal magnetic compasses that help them navigate. When the phone starts ringing, the radio waves likely disturb their internal compass and this makes them want to avoid the phone. Australian entomologist Nigel Andrew from the University of New England:

“A lot of ants use magnetism to orientate themselves. [They] have magnetic receptors in their antennae,” he said. “If they’re travelling long distances they use magnetic cues from Earth to know if they are going north, east, south or west.”

“There are many ants that actually start forming in a circle without the phone,” Mr Robson said.”It’s an unavoidable consequence of their communication systems. Having the ants together like that, the shape of the phone may have something to do with it and the vibration might get them a bit more excited, but a lot of ants will do it even without the phone.”

In the meantime, the video has gone viral and is delighting millions of viewers around the world. Now, you also have an explanation for it.