It’s the first time a non-human animal has been observed caring for the wounded. The behavior surprised biologists, showing just how complex ants really are.

Matabele ants (Megaponera analis) are one of the biggest and most violent ant species in the world, being named after the Matabele tribe, fierce warriors who overwhelmed various other tribes during the 1800s. You thought termites were bad, but Matabele ants raid termites two to four times a day, killing workers and bringing them back to their nest where they feed on them. Every time they raid, squads of 200-600 marauding ants march out, preying on the termites. But the termites are not defenseless.

Termite soldiers are well-armored and strike with powerful jaws. While they are often overrun by the Matabele, they can still deal powerful blows to the invaders, heavily injuring or even killing them. As a result, it’s quite common for Matabele soldiers to lose one or several limbs.

So far, nothing uncommon, just another ruthless day in the life of insects. But after the raid, things take an unexpected turn, as medical troops come in and rescue the wounded — but only the ones that aren’t severely injured.

It all started in 2017, when Erik Frank, then at the University of Würzburg, Germany reported that Matabele ants routinely carry their wounded back to the nest. This is already unusual as most social insects (ants included) see individuals as expendable. The Matabele, however, are different. They can release a pheromone, signaling that they need help, and help is always dispatched (if physically possible). Other ants would come, pick the injured ones up, and carry them back to the nest.

Now, Frank and his colleagues, currently at the University of Lausanne in Switzerland, have found what happens after the wounded are brought to the nest. 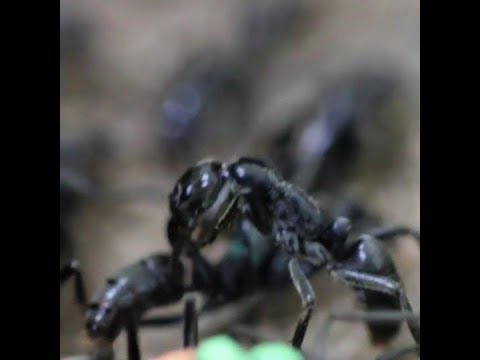 They found that “nurse” ants “lick” the wounds of the soldiers, and this greatly increases their chances of surviving. Without this treatment, only 20% of the ants who had lost limbs survived. With it, up to 90% survived and were fit to fight another day.

It’s not clear what this treatment is doing. It could be that it simply cleans the wound to prevent infection, or the nurses could be applying an antimicrobial substance through their saliva. Either way, the similarity to human medical treatment is striking.

“We suppose that they do this to clean the wounds and maybe even apply antimicrobial substances with their saliva to reduce the risk of bacterial or fungal infection,” Frank explains.

A game of odds

But things get even more interesting. As the biologists were observing ants in Comoe National Park in Ivory Coast, they noticed another unexpected behavior. The ants do a type of field “triaging” — they decide who to help and who to leave behind.

Of course, the battlefield is a rough place and it might not always be possible to help everyone, so ants make a judgment call on who to help. But interestingly, it’s not the helpers that make this decision but rather the wounded themselves.

Ants who were lightly injured and lost one limb asked for help by releasing the pheromone and orienting their body in a way that facilitates transport (I know, losing a limb doesn’t seem like a “light” injury, but these ants often made a quick recovery and move just as fast as healthy ones). Meanwhile, badly injured ants missing five of their six legs flail wildly if someone attempts to rescue them, resisting any help. In other words, the helpless make sure that no energy is wasted on them.

“They simply don’t cooperate with the helpers and are left behind as a result,” Frank says.

This study is intriguing on multiple levels. For starters, how did ants develop this behavior, what drove them to start helping their injured comrades, and why don’t other species do it?

These questions probably have a lot to do with the Matabele’s warrior behavior. They almost certainly don’t do it out of compassion, but because their colony depends on it. At one point, almost a third of the entire colony had lost at least a limb, and medical care ensures that they can still be useful members of the colony.

It’s also interesting to see just how ant nurses dress the wound, which is something Frank hopes to solve in future studies. If ants do inject some sort of antibiotic to treat the wounds, then perhaps there is a chance of adapting this antibiotic to humans.

The Matabele tribe, the ants’ namesake, often waged war against their neighbors and rose up to defend their lands against British colonists. Similarly, the ants prey on nearby termites. But presumably unlike the humans, ants have no problem in sacrificing themselves for the greater good. Why do severely injured ants act so selfless, and how do they decide when they’re beyond hope? That is another question for future studies to answer.