by Mihai Andrei
in News, Psychology

Having a small obstruction barring an emergency exit can actually increase its efficiency and limit stampede damage caused by chaos and panic. 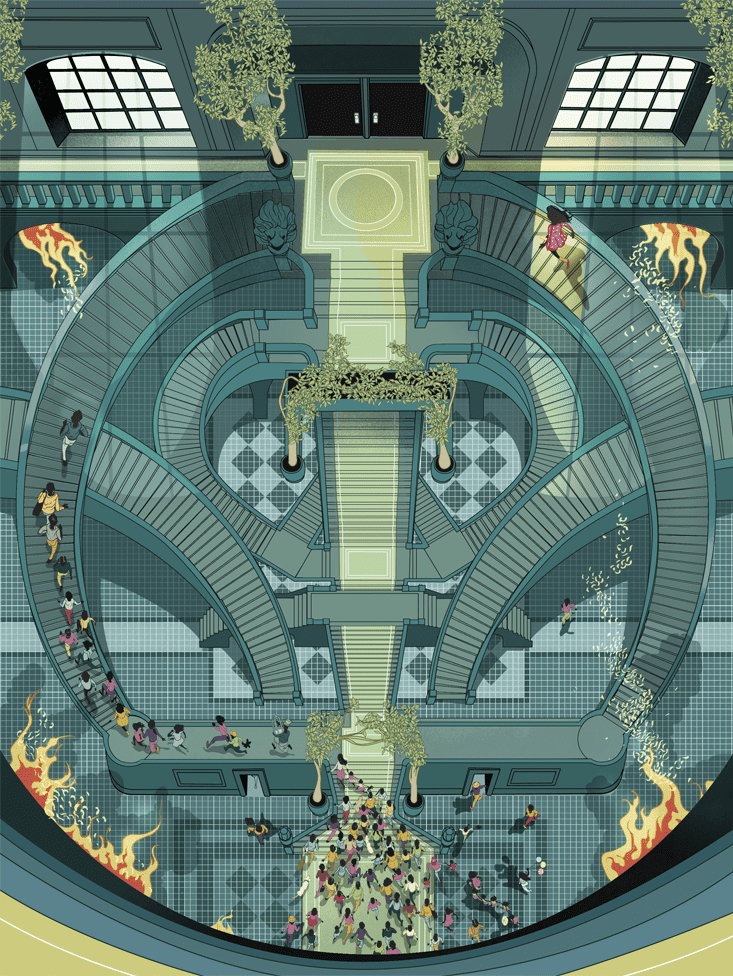 In the midst of chaos and panic, most animals clump together and act irrationally, actually reducing their chances of survival in a pointless stampede. As sad as it may be, humans act pretty much the same way – often times, the damage caused by the stampede is equal, or even larger, to that caused by the actual threatening event. Swiss physicist and sociologist Dirk Helbing noted in one of his studies on human panic that “physical interactions in [a] jammed crowd add up and cause dangerous pressures… which can bend steel barriers or push down brick walls.”

There may be an evolutionary answer to why this happens – some animals evolved to clump together when threatened, because it increases their chances of survival. Several species of birds and fish do this.

“Predators have the ability to focus and concentrate on individual prey,” says Ralph Tollrian, a professor in Germany who has spent his career studying the predator confusion effect. “When they handle one prey, they can’t hunt the next.”

Birds and fish especially form groups that move chaotically in the presence of a predator, giving it “cognitive overload” – basically confusing it with too much information. The predator’s cognitive overload can be so big, that it actually gives up on its chase entirely.

“A confused predator can sometimes become frustrated and not hunt at all,” Tollrian says.

Humans too, can sometimes find safety in crowds. When we moved to an agrarian, and later, an urban lifestyle, the dangers which we face have changed – the responses, however, have not. Randolph Nesse, a professor of psychiatry at Arizona State University who studies the evolutionary reasons behind anxiety explains:

“We continue to be afraid of things that were dangerous to our ancestors,” Nesse says.

When we panic, reason gives way for instincts, and we act irrationally. In a room with several exists, people tend to clump to just one – disregarding logic and often getting injured. Nirajan Shiwakoti, who studies crowd dynamics at Monash University in Melbourne, Australia, conducted a study on ants to see if that behavior might somehow be improved. Sure, there’s a world of difference between humans and ants, but in 20009, Shiwakoti showed that the way ants try to escape during panic is similar to the way humans do it.

So he began experimenting with the number and nature of the exists, and ultimately found that creatively obstructing the flow of the panicked ant crowd sped its escape.

“The column gives you some channels on the left and on the right, and this reduces the conflict at the exit.” The reason the corner exit is so efficient, Shiwakoti says, is because it has an intrinsic ability to structure the flow. “If the exit is in the corner, then people are probably only coming from left and right, so you have a more uniform flow.”