The first satellites could appear in 2019.

The ultimate goal of SpaceX has always been to reach Mars, but in the meantime it seems the visionary private space company has its eyes sets on other targets. Yesterday, we learned more about SpaceX’s plans to launch a huge fleet of tiny satellites into Earth’s low orbit to connect every part of the globe with fast internet. As many as 4,425 satellites would be launched part of the initiative or nearly three times as much as there are active satellites currently in orbit. 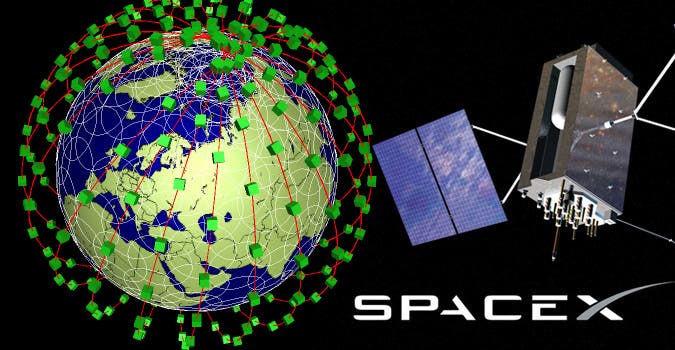 According to Patricia Cooper, who is SpaceX’s vice president of satellite government affairs, the first prototype satellite will go into this space as early as this year, followed quickly by another launch in early 2018. These first attempts will serve as a proof of concept so that SpaceX can assess whether or not it’s feasible to send a couple thousand more. In 2019, SpaceX expects to seriously start deploying satellites in low-orbit. By 2024, SpaceX ought to have an entire network of satellites capable of delivering internet to any part of the globe, and presumably cheap too.

The thousands of tiny satellites will operate in 83 planes at an altitude between 1,100 kilometers and 1,325 kilometers. These will be linked with ground control centers, gateway stations, and other Earth-based facilities to offer a steady connection somewhere between cable and fiber-optic in quality and a latency of around 35ms.

When it’s all said and done, the project should amount to $20 billion in investment, with Google and Fidelity already investing $1 billion with SpaceX for this particular purpose.

Whatever’s the case, we’re talking about a massive scale with a high potential for disruption in the industry. Providers won’t have to invest nearly as much in digging trenches, hundreds of thousands of miles of cables, and so on. Instead, they’ll just rent the service from SpaceX, or that’s what likely Elon Musk’s company hopes.

“Once fully deployed, the SpaceX System will pass over virtually all parts of the Earth’s surface and therefore, in principle, have the ability to provide ubiquitous global service,” the FFC application reads which SpaceX filled a while ago. “Every point on the Earth’s surface will see, at all times, a SpaceX satellite.”

An additional 7,500 satellites might be deployed at an even lower plane from the main fleet to further boost capacity and reduce latency. By now, some of you might be wondering how on Earth will SpaceX pull this off? Well, earlier this year, India broke the record for the most satellites launched on a single rocket with 104 satellites. Most were nanosats that only weigh 6 kilograms (13 pounds) so it’s foreseeable it won’t be long before SpaceX shatters this record.

SpaceX is also growing better and better at launching, landing, and then reusing the same Falcon 9 rockets. This puts it at a considerable advantage over its competitors as it can cut down costs a couple of fold, at least. At the same time, the huge amount of satellites SpaceX is considering can only exacerbate a growing space junk problem, as reported earlier by us in more depth.

The announcement is still fresh but seeing how the first prototypes will be deployed later this year, things are destined to move very fast. It will be interesting to learn more as developments arise. It would be particularly interesting to see how Facebook reacts to the news, for instance. Not too long ago, a Falcon 9 rocket was destroyed shortly after liftoff and with it Facebook’s $200-million satellite destined to connect users in Africa to the internet. Facebook’s initiative called internet.org wants to bring a free interent connection to those people who most need it, particularly in developing countries around the world. Internet.org has come under fire, though, because it’s not really offering free internet — it’s free access to a limited variety of web services, with Facebook and partners at the center. As Mahesh Murthy wrote for QZ, it’s “poor internet for poor people”.

I have a feeling SpaceX’s vision of a fast internet connected over satellite will be radically different. Perhaps it will be even more business orientated than Facebook’s approach but certainly net neutral. We’ll just have to wait and see.